From the Lounge to the Lansdowne Roar

Irish soccer star Kevin Doyle looks back on his humble beginnings from collecting glasses in the family pub, to playing in the Premier League and representing his country at the Aviva Stadium.

I was working in the family pub down home in Wexford when Jason McAteer scored the goal that beat the Dutch in September 2001, what a magic moment in Irish sport. I was 17 going on 18, and about to join St Patrick’s Athletic in Dublin, and my football life was only beginning.

Playing for the Republic of Ireland seemed like another universe as I picked up all the empty glasses. Deep down I believed I could get there. All those hours working on my touch and heading thousands of footballs meant I always believed.

There had been offers for trials in England, but I was always injured or just a homesick puppy; I wouldn’t have enjoyed that experience. Even going to St Pat’s seemed enormous. How would I get near the first team?

Two years later I was starting and scoring goals for Cork City. Such was my form that Reading came calling and within a few seasons I was scoring regularly in the Premier League.

The next ten years saw my dream become a reality before finishing up at the Colorado Rapids in the MLS. 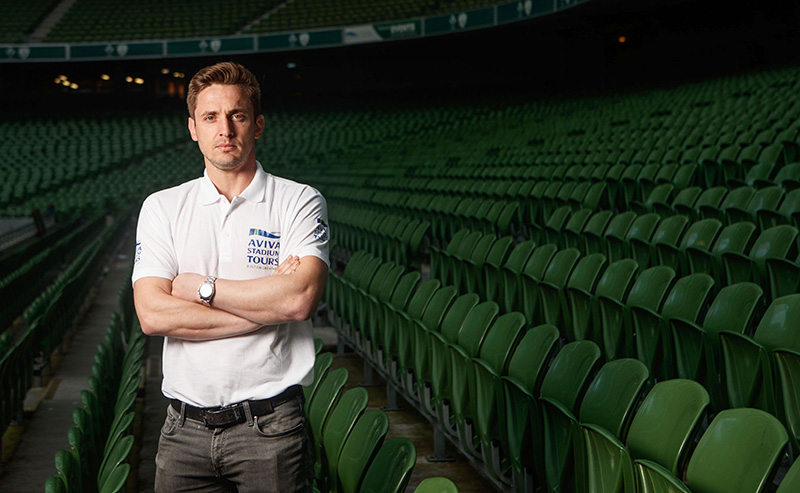 That’s not where I wanted it to end. The aim was to get back to an English club and make the Euros squad in 2016. But, a concussion called a halt to my career.

I went back to the Aviva recently to help promote the new stadium tour. That’s why McAteer’s goal was on my mind. Usually the changing room is a hive of activity but 7am on a week day, the place was serene. No players, no physios or medics, no nerves, no last-minute words. No team being read out. But the buzz of being there is still the same.

Immediately my eyes went to the seat in the dressing room between Robbie and Duffer. My spot for the bones of a decade whenever I was fit and in form.

Robbie Keane and Damien Duff are some pair to change beside before your first Ireland game. When I arrived in 2006 they were established pros, world renowned, with Robbie having his best season for Spurs while Duffer was about to win his second Premier League medal with Chelsea.

They were at the peak of their powers, living breathing legends. We’d all watched their heroics at the 2002 World Cup, so I was very much in awe. It takes time to settle in between two superstars. It helped that they were gentlemen. All I had to do was perform and follow the lead of big men up front who came before me, Niall Quinn and Tony Cascarino – then for a few years, me!

It was funny being back in the Aviva. The memories immediately drifted to my first cap against Sweden. Steve Staunton was the manager. We won 3-nil playing a 4-3-3 formation with yours truly up front as Robbie and Duffer played off me. Felt like I got two touches the whole game, but I was awarded the sympathy man of the match afterwards! I was making my debut, so they gave it to me.

The nerves are still fresh in my mind. I never had them so bad before or since. It was the old Lansdowne Road stadium, the place I’d come to as a kid and watched Roy Keane, Packie Bonner, all the greats on television. The facilities weren’t as modern as they are now but that didn’t matter to me – the changing room was truly alive in those moments before we went out. Robbie had just been named our new captain.

The nerves manifested themselves as stomach cramps.

”You look for an escape hatch. Maybe I can come down with a niggle. Silly stuff goes through your head.

But this is how you want to feel. The nerves energise you once you get onto the pitch. There was rarely much talk in those minutes before we headed out to the tunnel, out for the anthems as a sense of occasion that washes over you. This tour replicates those tunnel walks and as I head out towards the pitch all those old feelings return.

Most games go by in a blur. I would use the anthem as a trigger. I’d be mumbling along but inside there was a last-minute check list: ‘What is my job? Where do I need to be?’

Seeing the jerseys on display brings back such great memories. The shirt I wore against Estonia in European Championship play-offs is on the tour, which is a great honour.  It’s a pleasure to see it between the jerseys of two heroes of mine Packie Bonner and Roy Keane. I didn’t realise it was going to be part of the tour and it was a nice surprise to see it. 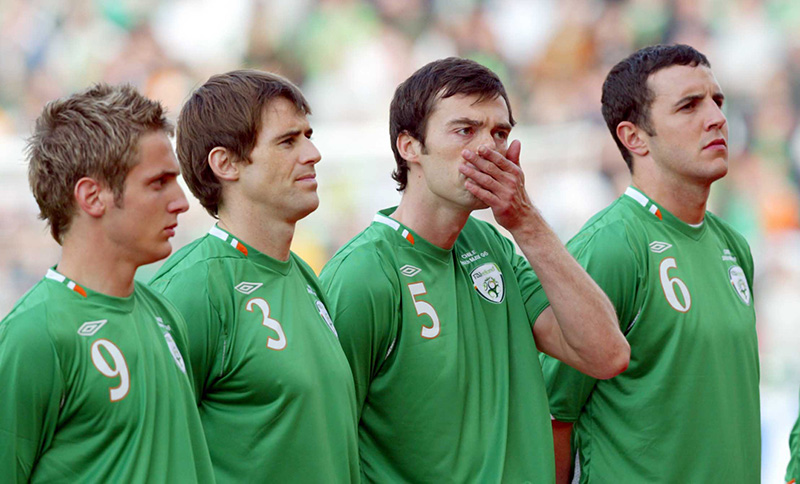 As first nights go mine wasn’t bad. Liam Miller scored a fantastic goal that night. It’s so very sad that he has passed on. Gone too young.

I went on to get many more caps for the Republic of Ireland, but that night lingers, just the noise of the place. It was rambunctious like when I was in the crowd joining the world-famous Lansdowne roar.

Being a late comer to elite football, my Ireland call up wasn’t until I had turned 22 during that first season with Reading when we were promoted. But that meant I was ready, both physically and mentally. When the chance came I didn’t want to let it slip. 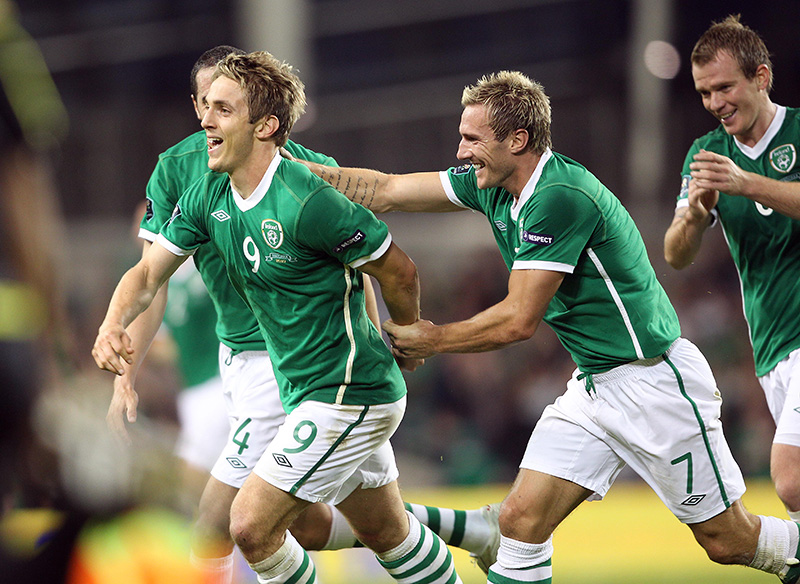 The inevitable of every player’s career is that it ends, and you don’t always get to choose how. My decision to retire came after a year of concussion related problems in Colorado. Nearly every time I headed the ball I’d feel something. It wasn’t safe to continue. That was the advice. At the time I really wanted to play on. The plan, in my mind, was to return to England and play my way into the Ireland squad for Euro 2016. My contract was ending in America. They wanted me to sign a new deal but the end, when it came – and maybe I should have realised it was coming – was out of the blue.

The attitude to concussion in America is different – there is a greater awareness – so I was surprised by the reaction at home. Everyone was very interested in what was happening to me.

I needed to absorb it all.

I wanted to play on.

Doctors advised me against it.

I hung on for as long as I could but, at 35, I’d had my career, I’d made it to England via the League of Ireland. I’d played in the Premier League, scoring regularly. 64 caps for my country. 14 goals.

A fantastic career if truth be told.

The increased interest in my situation was because the retirement coincided with Alan Shearer’s documentary highlighting the link between ex-England striker Jeff Astle’s dementia and years of heading a football. That made me realise I’d made the right decision and probably should have retired sooner. 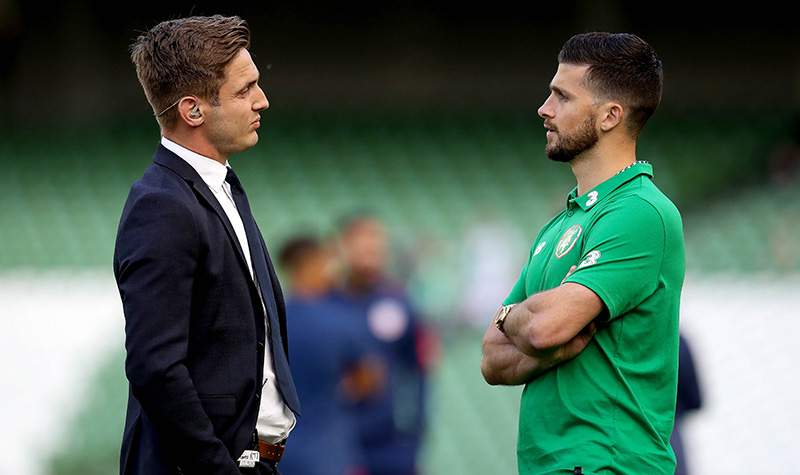 But you have your dreams. As a footballer you are always chasing the opportunity to play in a major tournament. Euro 2012 hadn’t gone well for any of us but, as I said, I had my time as a footballer.

I’m not overly worried about concussion in the game. Balls are lighter for one but there is far less heading. Football is played on the ground more than ever before. I was the centre forward. The man up top. The ball used to be directed towards me to get a touch with centre half elbows, heads and limbs flying.

Every kid today must be able to play on the ground. I’d have liked that more as I began as a player who looked for ball into my feet, but I practised heading so much as a young fella. I wanted to be a great header of the ball.

Also, a greater awareness of concussion is out there today. Players are kept out for two or three weeks now. That’s a very good thing as in the past players came back far too quickly.

Heading the ball is a fantastic skill and without it I wouldn’t have had the career I had but that sort of repetitive heading doesn’t wash anymore.

I see this first-hand coaching the Ireland Under-17s now that I’m home, after all these years, back living in Wexford again.

The family pub has since been sold on so helping with our talent pathway and media work keeps me busy these days – I collected enough empty glasses!

Kevin Doyle helped to launch the new Aviva Stadium Tour. The new Aviva Stadium Tour provides fans with a unique behind the scenes experience of Ireland’s primary international sports’ stadium giving them not just an understanding of Ireland’s international sporting heritage but also a first-hand experience of what match day is like for our international football and rugby players. Tickets and more information about the tour can be found, here: https://www.avivastadium.ie/tours

If you enjoyed Kevin’s story, you might enjoy Evanne Ni Chuilinn’s “You Never Really Know“.