Many Colours Make The Man

Westmeath’s star corner back Boidu Sayeh talks about his early years in war torn Liberia, moving to Ireland aged eight, and his life in the Midlands.

I am a proud Irishman. I am also a proud Liberian man. It is possible to be both. 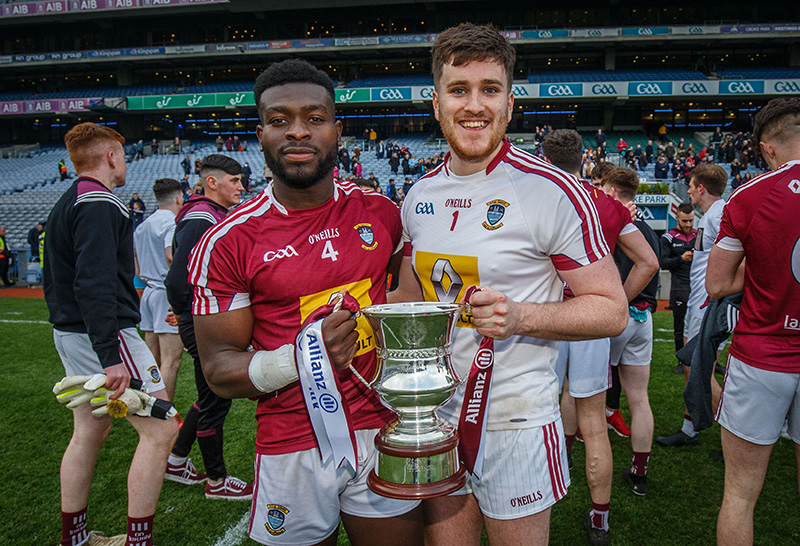 I was a war baby. Born into the Liberian Civil War in the mid-1990s. I don’t remember much about that time. Some memories seem like I dreamt it, other memories are very real.

I remember the day in January 2003 when I was six and my father came out of the room where my mother had been spending her last days. She had been sick. He told me she had died. That tall, beautiful woman that looked after me was not going to be there anymore.

After that, I was always on the move as my family tried to protect me from the ever-increasing conflict. My brothers and sisters did everything they could to keep me safe.

Another memory is staying at my brother’s house with his family. He was in the army, had a good career and a lovely home where I got to stay for a while. Gradually the war caught up with us.

My aunt Thérèse was from a place called Rosemount in Ireland. She had worked in Liberia for a number of years and was there when I was born. Thérèse was a friend of my Dad’s. He had studied in England and had Irish friends; they even spoke Irish together. She was married to his brother, my uncle, Ben. 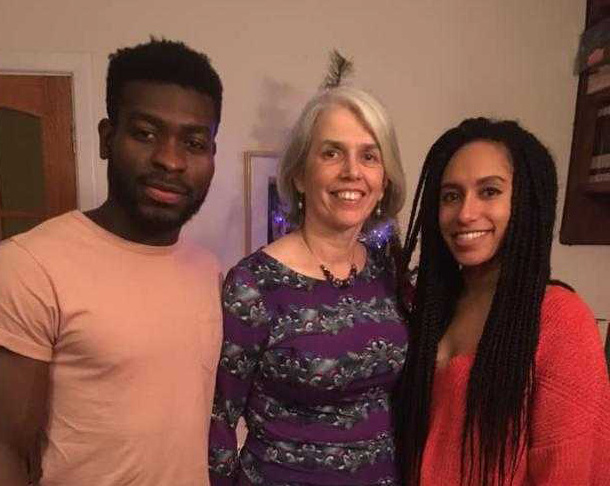 Boidu Sayeh with his mother Thérèse and his sister Mairéad at home in Rosemount. ©Boidu Sayeh

As the war situation got worse, Thérèse asked my Dad if he would allow me to join their family in Ireland. Uncle Ben travelled to Liberia in 2004 having arranged with my father that he and Thérèse would adopt me. So, on my eighth birthday, I left Liberia and the conflict behind.

”Moving to Ireland was huge for me. It changed the course of my life.

You would imagine that the idea of leaving your family to move to another country would be frightening for a young boy. I just remember being so excited – I was buzzing. It was the biggest adventure of my short life even though I had no idea where I was going.

Straight away I was surrounded by my new family. 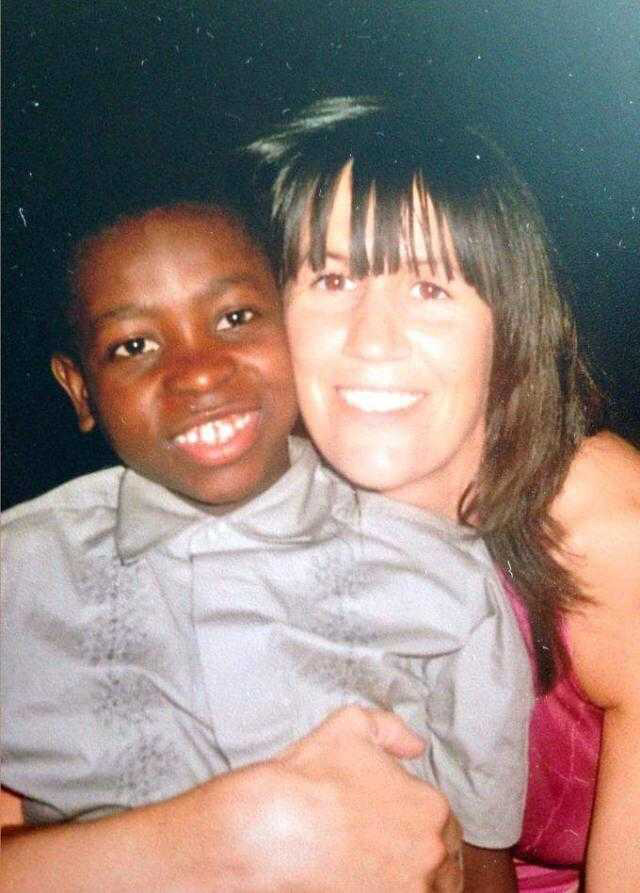 My mam had a small party for me at the house so I could meet everyone, as she didn’t want to overwhelm me. Still, there just seemed to be so many of them – aunties, uncles, cousins, my grandparents – lots of new faces, white faces, that I had never known before. Naturally, it was all a bit overwhelming, but they welcomed me as their own and from day one I knew that I was going to be loved and looked after. I stuck by my sister, Mairéad. She was the go-between for the first few days as I got to know and understand everyone.

Thérèse and Ben are my mam and dad now and always will be. Thérèse, in particular, has been a massive inspiration for me – always by my side, helping me to get involved in sports and in my community. They helped me make Rosemount my home, but I have not forgotten my roots.

I’ve been back to Liberia. Things have changed. My brother’s family no longer live in comfort in their lovely home. They, like so many others, are struggling to survive in what is one of the poorest countries in the world.

My father passed away when I was 16 from a heart condition. We got to spend time together before he died. He told me about his life, his travels, stuff I never knew about him. I also know he was happy that I had found a new life in Ireland.

I try to get back there when I can. I feel like I have a responsibility to my family in Liberia to make the most of my life here in Ireland. To live well and make a success of myself. 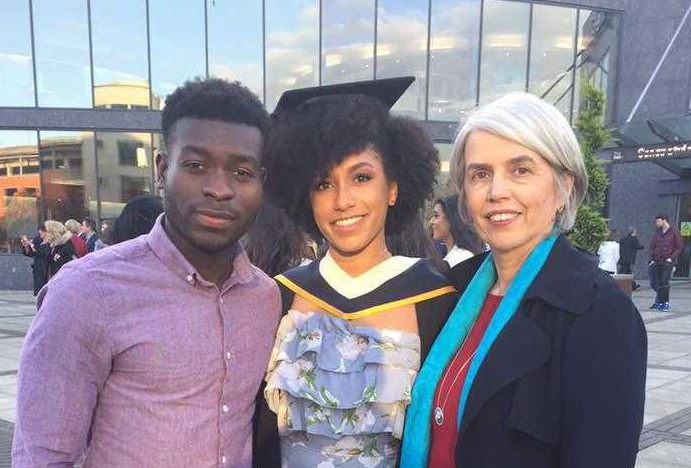 Boidu Sayeh at his sister Mairéad’s graduation from DCU with his mother Thérèse. ©Boidu Sayeh

”Of course, a small minority of people don’t think I belong here because of my skin colour.

I see and hear people speak out against what they perceive as the “threat of multiculturalism”. A few miles up the road in Longford, it was suggested recently that Irish people are becoming an ethnic minority in their own country and a photo of some black school kids was used as ‘evidence’ of that. That idea doesn’t make sense to me. I wonder what motivates people to spread that kind of message around social media? Is it fear? Is it hate? I would say it’s more likely to be ignorance.

The majority of people I know just want to live and let live, while contributing to their community. Race is not an issue for those people. Ignorance is dangerous though, no matter where you live or what you look like.

Put it this way, if a white person moved to Liberia and identified as a Liberian that would most likely be fully accepted without question.

Thankfully, that’s how it was for me in Rosemount. I quickly became part of the community and by my early teens I was lining out for my club, as someone spotted that I could be a decent Gaelic footballer.

My Grandad, Tony Kinahan, and my cousin Dylan were a big influence on me getting involved in GAA.

Tony was a “blow in” from Fermanagh but was a strong Westmeath GAA supporter, loved his football. He was full of encouragement and also full of honesty – if I was not performing, he wouldn’t sugar coat it, he’d tell it to me straight. That’s what you want as a young player trying to reach the top level.

At age 14 I was lining out with the Westmeath minors. Tony was very proud of that. Unfortunately, he passed away before he got to see me playing for the Westmeath senior team – playing in Croke Park in the League final.

”My teammates at Rosemount and Westmeath are my brothers.

There’s a huge team bond. I feel privileged to be able to play with those guys. 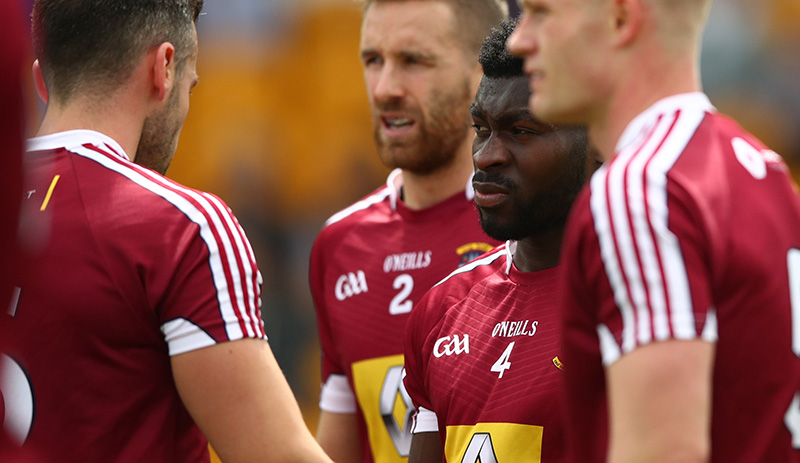 I get asked all the time about being subjected to racism in GAA. Of course, there are comments and insults but for the most part I just see that as guys getting frustrated or being arrogant. People can say what they want to say. I don’t need to react. I just get on with my game.

Underage for Westmeath and next to me in the full back line was one of my best mates and fellow-African, Israel Ilunga. Izzy was the victim of what I consider a serious racist slur in a Leinster minor game a few years back.

Izzy was challenging a Meath forward and gave away a free. The Meath player started making monkey sounds and gestures towards Izzy. In his frustration and anger, Izzy swung for the Meath player and, despite missing him, the ref gave Izzy a straight red.

We went on to win the game, so we ended up taking a case to Croke Park to get the card rescinded for the next round. That made it an even bigger deal and attracted a lot of media attention. That was tough on Izzy. Name calling is one thing, but a line was crossed with how that player behaved. Thankfully, Izzy’s red card was rescinded.

”The Meath player escaped any sanction or further investigation.

That’s not right, it shouldn’t happen. I like to think that if it happened now, there would be an investigation and the player would be sanctioned if found to have committed a racist offence. There’s no place or excuse for that behaviour in our game.

Young people that move to Ireland from other countries should be encouraged and inspired to play Gaelic games. It can be an amazing experience for any kid and a great way to get immersed in Irish culture. In the first place, those children have to feel like they belong in their local school or club team – that it’s as much their game as anyone else’s. 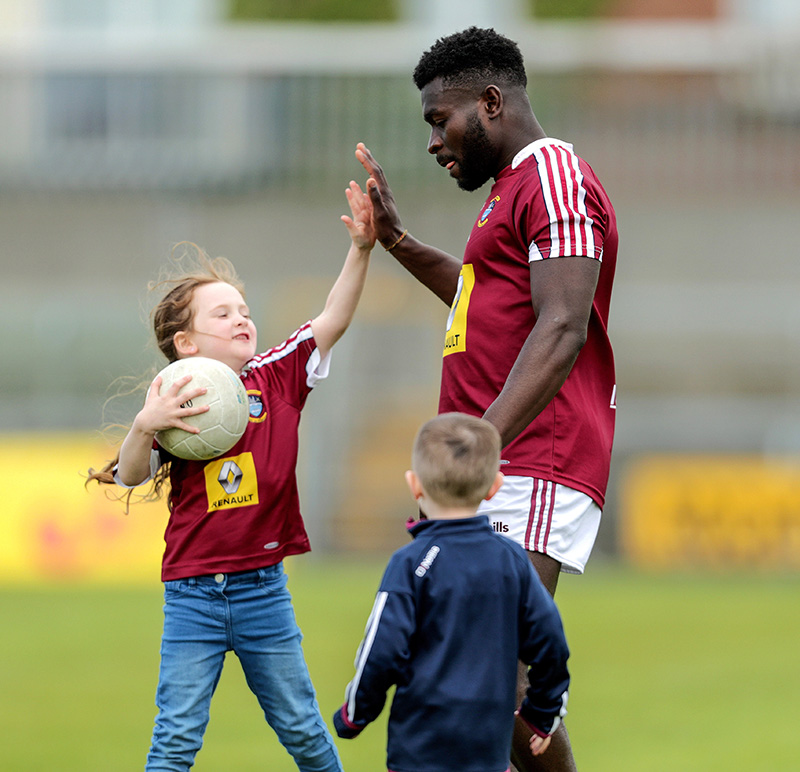 Someone suggested to me recently that I’m a “role model”. I’m not sure about the label but I definitely feel that I have a role to play in showing all children, not just children from abroad, that they could get involved in GAA.

The best way I can do that is to keep improving my game, keep getting a bit better every day and aim to be competing at the top level in Gaelic football. I don’t know any better way to inspire people than that. If that makes me a role model, then ok.

It’s been a great journey so far; I just want to keep enjoying my football.

I often wish my mother could have seen that journey and I think about what I would say to her if I had the chance. I guess I would keep it simple and just say “thanks for bringing me into this world and this life… and for the good looks!”

A friend of mine recently told me a theory about the origin of the Irish word for an African man – “Fear Gorm” – which literally means “Blue Man”. The theory goes that the ancient Celts were a sophisticated sea-faring people like their Nordic cousins, and they made it all the way to the West African coastal lands. From there they witnessed and borrowed a Shamanic ritual of covering the body in a hallucinogenic paste made from plants which made the body appear blue. The Blue Man would spend days in the forest and would pass on his words of “wisdom” to his tribe.

It’s just a theory of course, maybe true, maybe not. It doesn’t matter much if it’s true, I just love the idea of it. A man who existed in both African and Irish culture. A man who tried to inspire his local tribe. The “Fear Gorm”.

Whether people see me as a black, blue or brown man it doesn’t matter much to me. What matters is what I want to be. A proud Irish man. A proud Liberian man. A “getting a bit better every day” man. A GAA man. A good man. 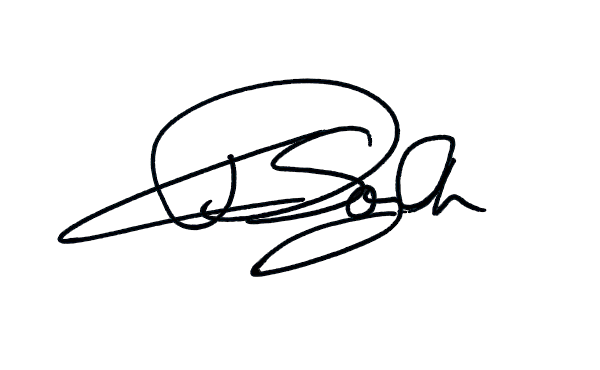