Donegal GAA talisman, Michael Murphy, talks his grá for his home in Glenswilly, his learnings as a young player and that All-Ireland winning feeling.

I was seven or eight years of age. I’d never been to Croke Park before.

Myself, my Mum and my Dad went to Meath to visit an Aunt and Uncle of mine. I must have been badgering my Dad all day to bring me into Dublin to Croke Park. Down from Donegal, the naivety of us thought we could just walk in and go for a kick about.

Seeing a reception area when we got there, we knew it wasn’t like any normal GAA grounds. My Dad asked if there was any chance ‘the wee lad’ could go out to the pitch but we were told it doesn’t really work that way.

We were heading away to leave when I spotted Mícheál Ó Muircheartaigh. I was a little star-struck. I’d have grown up listening to his commentary on the games. He was the voice and face of GAA.

Of course, he didn’t know us from Adam but him being him, he chatted away to us. Sure enough, Mícheál brought us out the tunnel to see the pitch of Croke Park for the very first time. 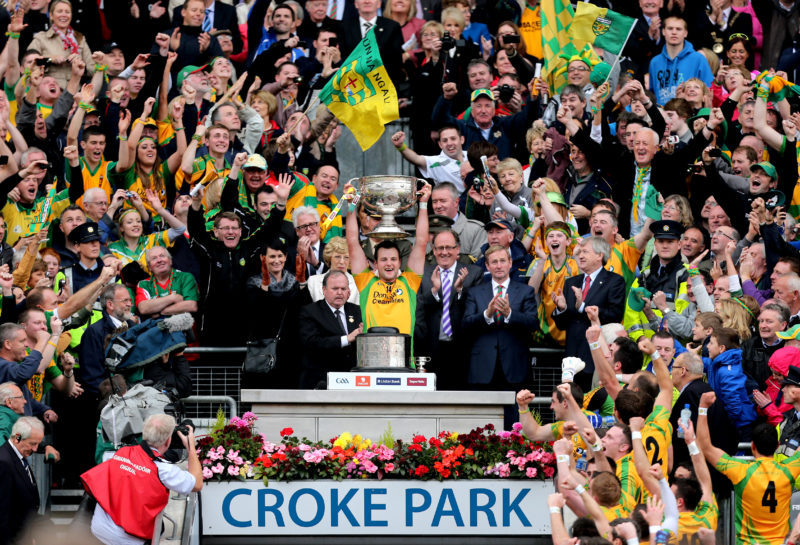 I never really felt like an only child or a lonely child. Both sides of the family are big, so I was always around people, and we’ve plenty of neighbours here that I grew up with.

My Father is from Mayo but once he moved to Donegal with his work as a Guard, he became involved with the local GAA. My club, Glenswilly is a fairly young club having been established in 1982. I came along in 1989 and my Father tells me he was still playing a bit then. I’ve very vague memories of seeing him play.

He was involved in management, and from no height I was tagging along to matches. I’d be a waterboy or just kicking along the sideline with my Mother. That was just the normal environment for me.

Obviously, as you grow up you realise there are other childhoods that people have but back then, that was the only one I knew. To me, it was perfect. I was happy out, living the dream.

I’ve always loved sports. I played the usual, Gaelic and soccer growing up. I was also involved in athletics, snooker, golf, and other individual sports.

All I wanted to do was play for Donegal. I wasn’t bothered about the books. 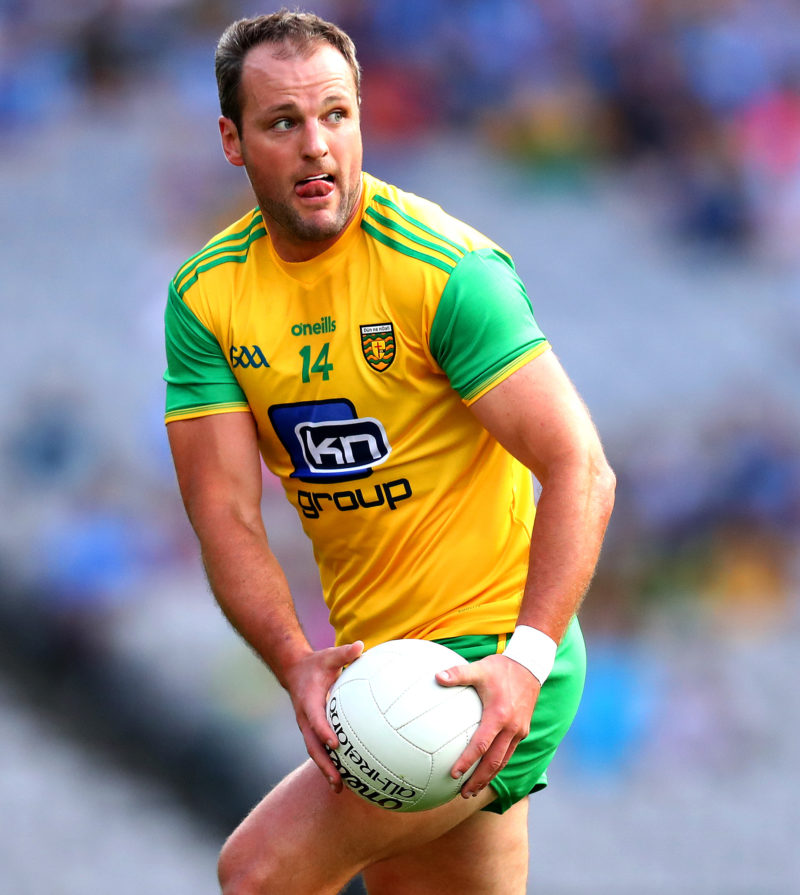 Michael Murphy in action against Dublin in 2018.

Growing up I wanted to be an army man or a teacher. By the skin of my teeth I got into my course in DCU to study P.E and Biology teaching the second time around. The hardest part for me was getting to college. Once I was there, I thrived.

To be able to play football and study a course I’d a real interest in was just the dream.

I remember going in on the first day. Typical me, down from Donegal I was looking around to see if there was anyone I knew from home that I could cling on to. I spotted one lad I knew and went to sit with him. Paul Flynn happened to be there too, and we hit it off right away. We ended up living together for four years.

It was brilliant. The amount of help that he provided me in terms of diet and the way he studied things that I wouldn’t have been too detail oriented about was great. I learned a lot of standards from him that are still set in stone today.

The National League was always a hot point in the house. We lived in a big house full of lads from all over the country. You’d Donie Shine from Roscommon, David Kelly from Sligo and a load of others. You could be meeting any one of them any given Sunday for a match.

Everyone understood the lie of the land. Housemates or not, for 70 minutes you were going to have a crack at each other. The following evening you’d all be back playing FIFA and cooking dinner together.

Before I went to college, I’d have thought that to be strange and from the outside looking in, it is a strange dynamic. Especially in GAA, things are so secretive and tactical. You don’t want to be giving anything away to other players yet you’re living in each other’s pockets. But that was normal to us. We were all in the same boat.

The International Rules series is great for breaking down barriers like that. I was only 19 when I first got the call. I was very much a novice at intercounty, and I was stepping into a dressing room with the likes of Graham Canty, Bernard Brogan and Sean Cavanagh.

”You might have had preconceived ideas of fellas that you don’t like them because of the way they, or their team play. You realise quickly that they’re not that different to you. They’re all just trying to be the best they can be. They’re just trying to win for their county. 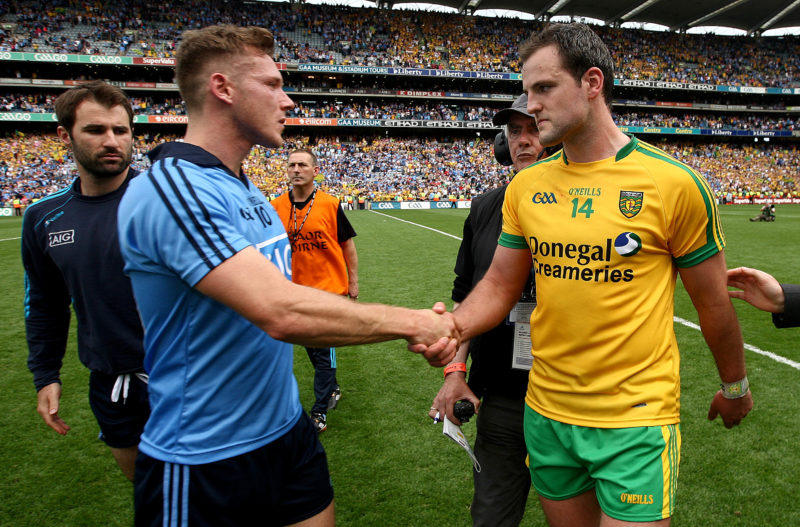 Paul Flynn and Michael Murphy before the All-Ireland semi-final 2014.

I finished up in DCU in 2013 and it was a quick turnaround to opening the shop in August 2014.

An opportunity arose and I took it.

This year, I’ve been studying a Masters in Sports Psychology, so I’ve been away from the shop a bit more. When COVID hit and we had to close the doors, it was really worrying.

I’m not a business head – but we have a core group of employees there, since the start, with families and bills of their own, that’s what worried me most.

All the talk was about opening the doors to get the economy moving again, but to me, getting my staff back working was the most important. We got there, just about.

”I love my home. I’m so comfortable here. I’m so proud of my county. I’m 31 now and I’m still in the home house. I’m not far from Letterkenny town, but far enough to say I’m a country man.

I love to travel, but I love coming home.

At 17, I was getting calls from Australian clubs to go out there with the AFL. I’d watch those games on a Sunday morning, and I’d think it’d be great to be one of those guys. But when the bluntness of the offer came, and a decision had to be made, whether to stay or go, there wasn’t a hope I’d go.

I’d have lasted a few days before I’d be on the first flight home. The draw of home is too much. There’s nowhere like it.

It was a Thursday evening and I was in Buncrana at my Grandad’s house when I got a call on the old Nokia phone from Brain McIver.

He said to come to training the following Tuesday and I was speechless. I was buzzing.

It’s a daunting experience going to that first training session. Being so young, I clutched onto Neil Gallagher and Ciaran Bonner, clubmates of mine. They literally picked me up from the back door of the house and togged out beside me.

Now, as one of the older players, I’m always reminded of that and I’m conscious of the younger lads on the panel. I always try to ensure that they feel integrated and part of the set up.

I was on the panel for five years when I was asked to be captain by Jim McGuiness. There was a lot made of it at the time but internally, we had the likes of Neil, Christy Toye, Kevin Cassidy, and Colm McFadden there still. Big players. Big leaders. There wasn’t a whole lot required of me.

I was young and still trying to find my way. But in 2011, we knew we were onto something.

We’d won Ulster and got to the semi-final. That winter leading into 2012 was a hard one, but we felt like we were on the crest of a wave. We just needed to ride it to the final this time.

I got advice from players who’d been there before. They told me how to deal with the hype, the media, the asking for tickets. I was kind of dreading the lead into that weekend, but that advice helped me cope. I was prepared.

The night before the game, few of the lads wanted to go and watch “Up for the Match”, but I was having none of it. I sat into bed watching an episode of “The Sopranos” and slept like a baby.

The ball is thrown in and everything else goes out the window.

Two minutes into the game I was in on goal. It was a carbon copy of what we did in training. Jim and Rory had drilled it into us. Our preparation came into play. This was it. 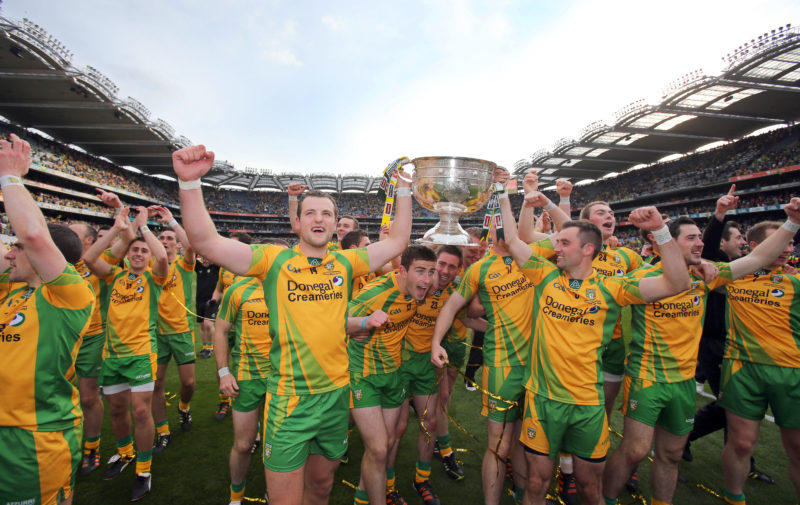 The Donegal team celebrate into The Hill after being crowned All-Ireland champions in 2012.

Doing a lap of Croke Park with the guys you grew up with, holding Sam Maguire, there’s nothing like it.

That’s when you see the faces in the crowd of your underage manager, the local shop worker, the parent of one of your classmates. Seeing what it means to those people is quite something.

That’s what the seven or eight-year-old me dreamed of when I was standing in Croke Park for the first time all those years ago.

Michael Murphy features in AIB’s The Toughest Summer, a documentary which tells the story of Summer 2020 which saw an unprecedented halt to Gaelic Games, available to watch now HERE 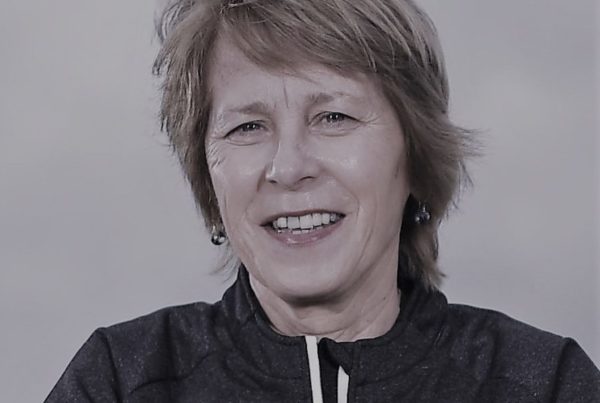