Where Does Your Heart Lie?

Punditry can be tricky. Not for me, not since I retired, but for the players. Not because they read, hear or see what the ex-player actually says about them in the media. It’s usually what their family, friends or partner tells them the ex-player has said about them.

Second hand information can turn into Chinese whispers very quickly but the damage is real because it impacts on people we care about.

”The player can handle criticism. Well, most of them can.

That’s what I mean by tricky.

A few years ago a former teammate – high profile Republic of Ireland international – rang me up about a column I wrote. “Kev, you said this, that and the other about me.”

Now, what he heard wasn’t what I wrote at all. His information was the highlights package without any real context. He was unaware of what I actually said because he hadn’t read the piece. I was able to stand over it.

Second hand delivery of my article, written about someone I know, became far worse than the actual words I put out there. In the individual’s mind he had still been wronged because those telling him what was written had painted a picture for him. The perception was more damaging than the facts.

I presume there’s plenty of similarly misconstrued information funnelling into the current Republic of Ireland squad at the moment. They are blocking out as much media talk as they can – by ignoring the first hand accounts (I’d have avoided social media like the plague as a player) – but the really negative stuff seeps through via angry mates and upset loved ones. The most cutting reaction to their performances pierces their bubble and inevitably stings the most.

Heaped on top of poor results, the second hand information only creates a deeply negative cycle. Hopefully, sooner rather than later, we break this pattern.

Results are the only remedy.

I actually appreciated the call that I got from the former teammate. It meant what he thought I wrote meant something to him, at least enough to pick up the phone. It told me that playing for Ireland was still very special to him, as it always was to me.

The big international nights were the pinnacle of my career, no question. The dream situation as a boy was lining up for Amhrán na bhFiann, turning to face the flag like Kevin Sheedy (the left footer!). 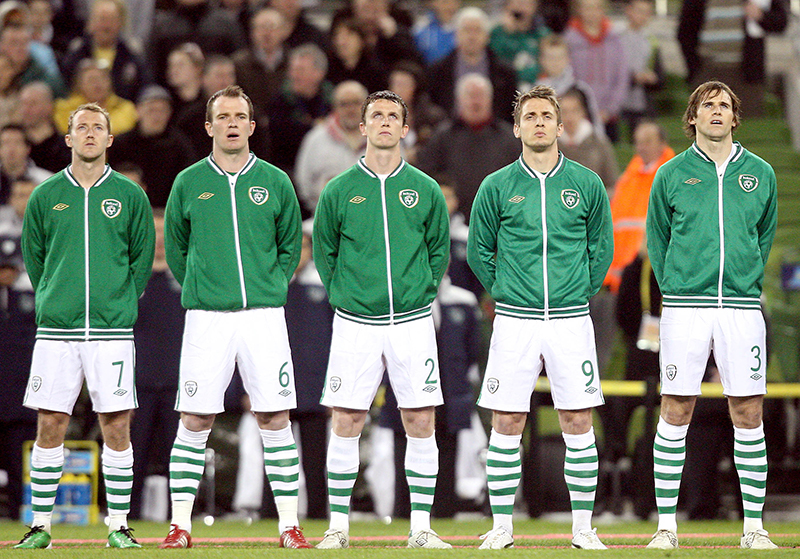 ”Every single cap mattered. My proudest stat is easy. From 1999 to 2011 I started every competitive Irish match.

That’s why Declan Rice pulling on a green jersey for the senior Republic of Ireland side and then having second thoughts doesn’t sit well with me at all. Yes, Declan is only a young lad but if any player has any doubts about where his allegiance lies – between England and Ireland – he shouldn’t be taking those three caps in the first place.

He shouldn’t have taken the first one against Turkey if he wasn’t sure.

I’ve been very clear about this in the media – as that is where I can be read, heard and seen nowadays.

Yes, the friendly-to-competitive appearance rule is ridiculous, and has created this mess as much as any one person, but I even have a problem with someone switching to Ireland after coming up through the English underage ranks, like Callum Robinson, who plays for my boyhood club Preston North End,  but I understand how that can happen.

We are thankful to have Shane Duffy and James McClean after both played underage for Northern Ireland.

But taking senior caps, while you’re still making up your mind? No, not having that. It’s wrong.

It’s about where your heart lies, plain and simple. 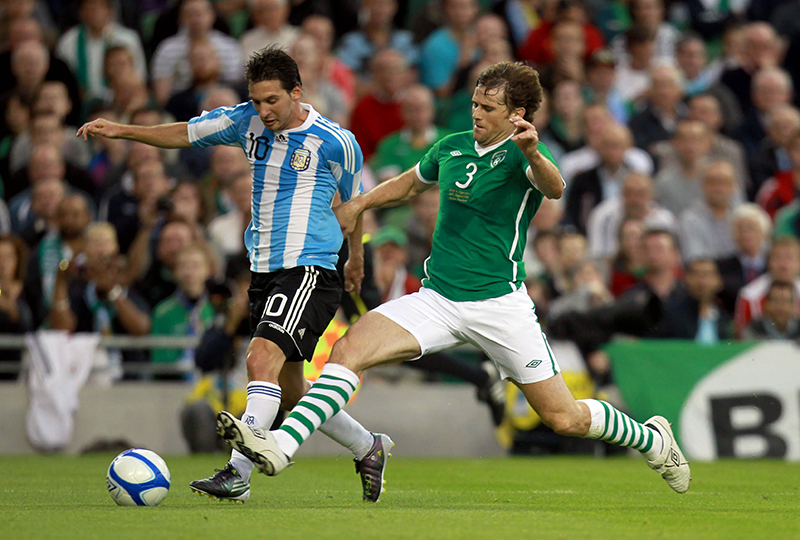 Looks like we’ve lost Declan Rice to England, which is a shame because he’s genuine quality, but as soon as any doubts were expressed, that’s it, you are not Irish anymore.

When there is a moment after you’ve played a non-competitive senior international for Ireland but need time to weigh up your options because the England manager – and Gareth Southgate is only doing his job – approaches you that, for me, is that.

”I like the way Michael Obafemi came out and stated he was "all in" to play for the Republic of Ireland before his debut against Denmark.

Agents getting involved is just crazy. They muddy what should be the clearest water imaginable: You either consider yourself Irish or you don’t.

I was born in Preston but being Irish, and not English, was never in doubt. Because of how we were raised at home.

Pulling on the green shirt has to mean more than anything else. We have no chance if it’s only half hearted.

Clearest water imaginable: when you dream about playing international football, what flag do you see flying? What anthem do you hear playing in your head?

That was never an issue, not even when England called me up to play for them as a kid. My immediate reaction was “No thanks”.

”I never considered myself English. Born and raised in England, yes, and grateful for that upbringing, but I am Irish.

Now, I’ll admit, if Ireland had never come in for me and I was 23, 24 and the opportunity came to play for another country at the World Cup, sure, I’d certainly consider it.

But, surely, in that situation the Ireland manager would have had another look?

I’d probably still say no to England. Again, that’s the way I was brought up. It’s different for youngsters now. Agents are showing them the amount of money that can be made with three Lions on the crest.

I’m not saying that’s what happened to Declan Rice or that’s how Gareth Southgate is selling it to him.

I’m just saying I know how times have changed. But revenue and income should never come into the decision of playing international football. They come after as a bonus. Maybe this has become a utopian idea. It used to be the purest reality.

I hope it still can be. 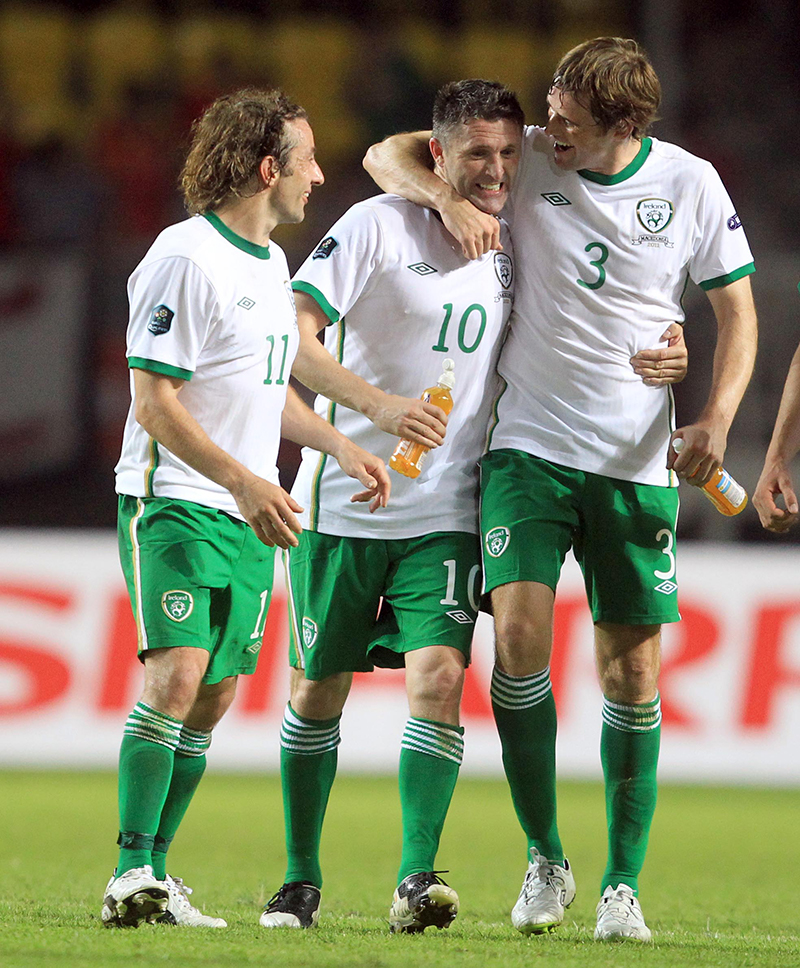 I did a media degree towards the back end of my career but what really turned me down this path was the PFA – the representative body for professional footballers over in the UK. They get a fair amount of stick but they encourage players to plan for the future. There are far too many mental health issues in football, mainly surrounding the difficulties coping with the end of our careers. Trust me, I know, having initially struggled with retirement. 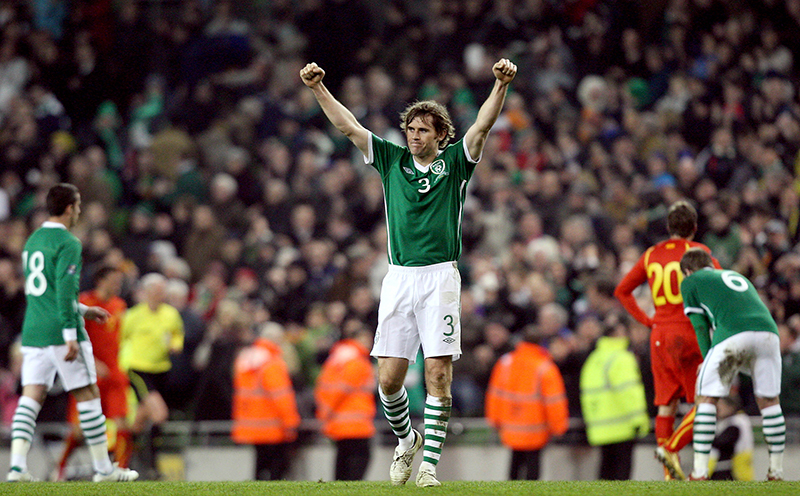 It’s a weird existence being a professional footballer. A successful career in sport is to keep playing over any number of years so 18 seasons, and 500-plus club games with 110 caps for Ireland – I feel blessed. It’s a dream job so when it gets taken away, and it happens in a flash, most people inevitably struggle.

That’s why the PFA is so important. Certainly from my experience and my brother, Farrell Kilbane, who is also an ex-professional but now works as a prison officer, I’ve seen what can happen. You play on the street every day from age six up to 36, in my case, so it’s what you know best, but when it ends you have a lot of living still to do.

Touch as many bases as you can, is my advice. See what fits. I did a little of punditry for Sky, BBC, RTE and TV3 before finishing up. Also collected my coaching badges, even coached with Hull for a year as I had a bad injury after signing for them in 2009.

The last four, five years have provided me with work in the media for The Irish Mail on Sunday, Off The Ball, BBC and Virgin Media.  I hope to keep it going. I enjoy speaking about the game.

Yeah, punditry can be tricky. The Republic of Ireland is a tough watch at the moment. It’s very difficult to analyse because we were witnessing overwhelmingly negative football, by the players and manager’s tactics.

Optimism for the future or any positive view is hard to unearth. I am conscious of that as a pundit. I’m digging, and that’s tough, because you’ve got to be honest. You owe that to yourself, the supporters and to the media outlets employing you but if I don’t call it as I see it I’ll eventually be found out.

The Republic of Ireland have a very long road ahead of them. Those who really care will stay the course. We don’t need the rest.

If you enjoyed Kevin’s story, you might like to read up and coming Irish footballer Barry Cotter’s Mick McCarthy Will Always Be ‘The Gaffer’.