International rugby referee, Nigel Owens, tells the story of his journey from growing up in rural West Wales to taking charge of the final at Rugby World Cup 2015.

Where I come from, in rural West Wales, rugby is part of who we are; your parents, grandparents, uncles, aunties, we are all born into the rugby family.

I grew up in the small village of Mynyddcerrig in Carmarthenshire with a population of about 140 people. Welsh is my first language; I didn’t learn English until I started school and didn’t speak it until I was about eight years of age.

Having passed my eleven plus I attended Gwendraeth Grammar School – a legendary nursery of Welsh rugby whose alumni included the likes of Carwyn James, Barry John, Gareth Davies and Jonathan Davies.

As the grammar schools were phased out, I moved to the welsh speaking school Maesyryrfa. I always made the rugby team – most likely because it was such a small school, we only had the bare 15 anyway. I started off my rugby career as a prop. Moved to full back.

We were playing a game at the end of the season. We had yet to win a game. My friend Wayne Thomas scored a try to level it at 12-all with only the conversion to come to win it. I stepped up to take the kick. Straight in front of the posts. I pushed it wide.

My exasperated sports teacher, the late John Beynon, said to me after the game, “Nigel, for God’s sake, why don’t you referee or something?!” That’s how it all started for me.

”A few people probably wish I did score that conversion!

In more recent years, the commitment as a professional referee has increased significantly, its moving with the game. I started in the amateur era and reached the international standard by the early 2000s. Japan will be my fourth Rugby World Cup. Some fundamentals have not changed as a referee.

A bit like the swan, you have to look calm and in control, even though inside you might be working hard and feeling the pressure. The biggest secret is to enjoy it. When you’re enjoying it, you have a chance to be the best at what you do.

The biggest compliment you can get from a player is that, when you’re refereeing a game, the player knows they don’t have to worry about your performance, only their own. All I have to do is referee the game and have the respect of the players. Every time I get on that field, I don’t try to be anybody else. I just go out there, be myself and enjoy it.

There have been occasions where things I said or did on the field garnered attention on social media, like issuing the yellow card to the ball boy in Dublin. I get texts from my friends, “That’s going viral” – I just thing “Really? Was that such a big deal?”. It was just a joke, part of the type of humour I grew up with. Because of occasions like that, and the way I sometimes communicate with players, people have built up a persona around me as some kind of man with the one-liners. That doesn’t mean that much to me.

”The most important thing to me is that I’m perceived as a good referee who does his job well. That’s all. 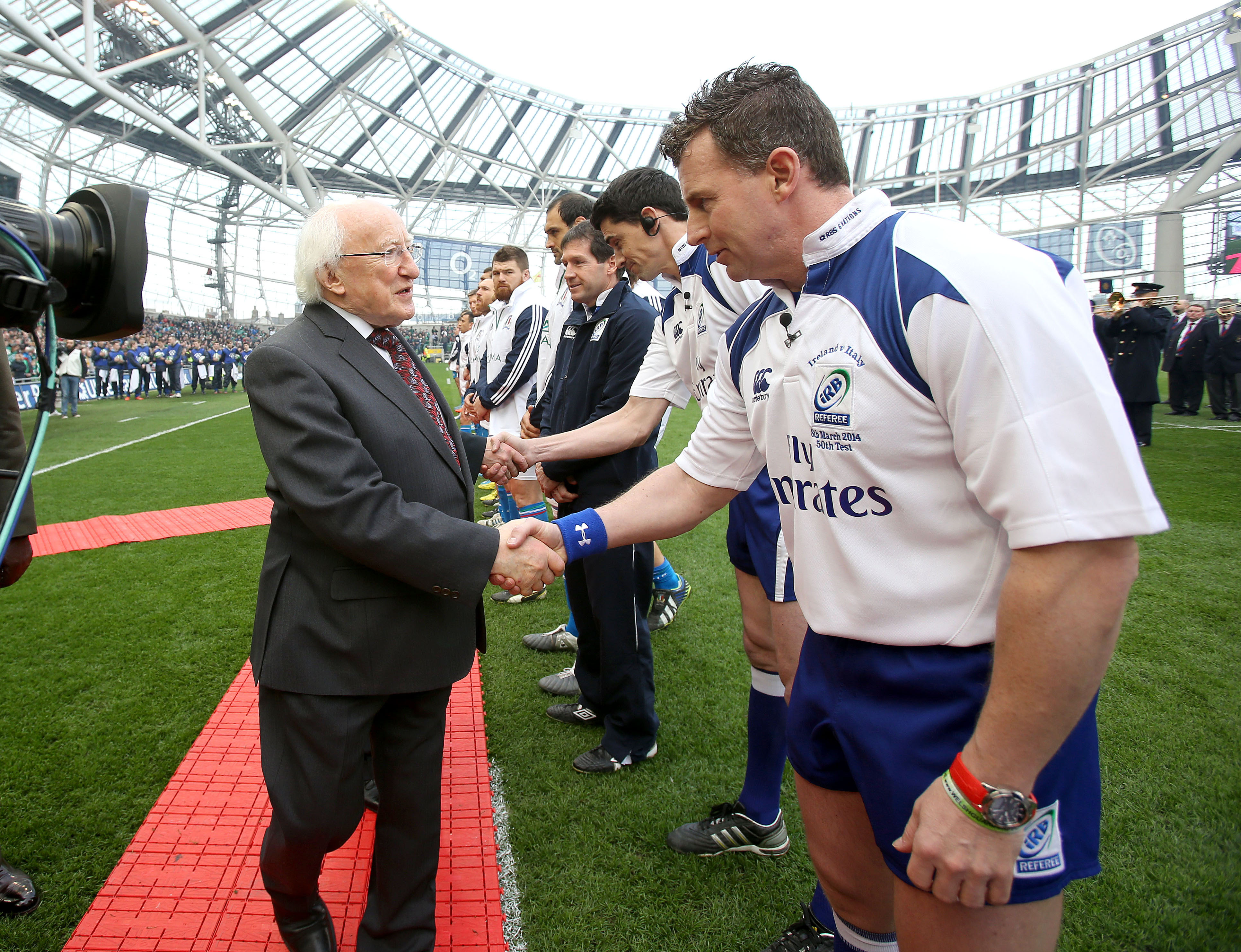 Not long into my professional career, I had done some interviews in the media telling my story. A big part of that story was coming out as gay. My struggle with hiding my sexuality and feeling that I would not be accepted for who I was, led to a suicide attempt in my mid-twenties. Thankfully, I was found and saved just in time. It pushed me to accept who I was and to learn to live my life with honesty.

Around that time, I got a letter from a mum who’s sixteen-year-old son had attempted suicide. The announcement was made that I would be a Rugby World Cup referee. The boy’s dad said, “Nigel Owens was selected, isn’t he the gay referee?  Not that it matters if he’s gay, if he’s good enough for Rugby World Cup.” Having heard that, the son Googled “Nigel Owens” and read the interviews online. He came downstairs and announced to his parents that his suicide attempt had been for the same reasons as Nigel Owens. It changed everything for that family and started the healing process for the young boy.

I had been approached to write a book about my experience and that mom’s letter motivated me to go ahead and do that. I never intended to become a spokesperson for the gay community, or for mental health. I just felt that I had a responsibility to convey my beliefs and use my influence to help other people.

It’s become very important to me that I can help people going through the same challenges I did. Not many gay men have felt comfortable coming out in the macho world of rugby and choose instead to live the lie – I’m hoping that can change.

Unfortunately, there are people out there who are homophobic and will do or say anything to knock you down. I can’t do anything about that, all that I can control is to be myself and hopefully help others by doing just that.

”My greatest regret from the whole experience is what I put my parents through.

Leaving a note, saying goodbye and heading up the side of a mountain to end my life. Their only son. Then they have to always worry if I would try something like that again. In the hospital my mother, Mair said, “If you ever do anything like that again, then you take me and your dad with you because we don’t want to carry on our lives without you”.

I lost my mother in 2009. She was such a huge influence on who I have become and what I’ve achieved in my career.

In my proudest moment, before refereeing the final at Rugby World Cup 2015, as the anthems finished, I looked to the sky and I could see my mother’s face looking down at me. I thought to myself, “I have got to perform today.”

I had gone into the tournament with a bit of a tag on me as the favourite to get selected for the final. I was appointed as referee for France V New Zealand quarter final in the Millennium Stadium. On the Monday the referee selections were made for the semi-finals.  I wasn’t among them. Deep down I knew that meant I was likely to get the final, but I couldn’t let myself believe it. A whole week had gone by until I was told officially. It was a strange old feeling. Not jubilation, more like relief. At last I can let myself believe it. Tell my family and friends.

2015 had been, in my opinion, the greatest Rugby World Cup we’ve had to date. There were so many contributing factors; it was well organised, huge crowds, great weather and most of all brilliant rugby.

So, if it was a poor final that’s all anyone would remember. The pressure was on us as match officials to perform and to ensure we delivered our part and did not become the story of the final.

Thankfully, we had two of the best sides in the world and one of the biggest rivalries in rugby. They delivered one of the best Rugby World Cup finals we’ve ever seen, and nobody was talking about the referee.

Back home, the working man’s club was packed with people from my community tuning in to watch one of their own referee the final. My dad was in among them. About four or five hundred people with most of them wearing cardboard Nigel Owens masks.

It made me so proud to think of them all jammed into our small club house. I wish I could have been there!

I had done my job. No decision I made affected the outcome. The best team won.

I got my officials’ medal from Prince Harry and stepped off the podium. I was physically and emotionally drained. It was a wonderful moment that I’ll never forget. I was all at once humbled, privileged and honoured to be part of that day.

Something that will stick with me from that final…

I blew the final whistle. David Pocock had played his heart out, but Australia had just lost. First thing he did was shake my hand and said thanks for a great final. Jerome Kaino did the same. He took the time to thank me before he went to celebrate with his mates.

Players taking the time to show respect at such a massive moment – a moment between winning and losing. I thought to myself, “This is why rugby is not only the greatest team sport in the world on the field, but without a shadow of a doubt, the greatest of team sports in the world off the field as well.”

If you enjoyed Nigel’s piece you might like to read Wayne Barnes’s – “I Don’t Strive To Be Popular“.

The Day That Changed South Africa