Former Ireland, Leinster and Connacht lock, Mike McCarthy, reflects on retirement, the mental challenges of the transition from professional rugby, the magic of Joe and how he’s using his experience to help other players.

I know they say you shouldn’t have regrets but looking back on my career I always think I should have and could have done more.

Two years on and I’m still getting used to retirement.

When you retire from rugby, you start looking for new ways to test yourself.

I went up Kilimanjaro in January. It was way tougher than I could have imagined.

I had heard about the incredible views from the top, watching the sunrise as the mountain casts its shadow over the valley. The only problem with that was, there was so much mist and fog we could have been at the top of Killiney Hill. Couldn’t see a thing.

The expedition company said they were the worst conditions they had witnessed on the mountain.

You’re carrying 18 stone up the mountain. I was man of the match, leading the charge until about 4,000 metres until I hit a brick wall. I was just knocked for six by altitude sickness. Thankfully, I recovered overnight and was able to continue.

Added to that, I was sharing a tent with Stephen Ferris, packed in like a couple of giant sardines.

It got pretty weird. After trekking through the tropical rain forest for the first four days without having a shower, wet wipes become your friend. So, I find myself naked in a small tent with Stephen Ferris wiping my back down with wet wipes. I still have nightmares about that. Wake up with shivers.

It was tough going, no doubt, but I enjoyed it, and we raised a lot of money for the IRFU Charitable Trust.

After that, I took on another charity trek with Tommy Bowe and Chris Henry up the highest peak in North Africa, Mount Toubkal in Morocco. I went into that thinking, “After Kilimanjaro, I can do anything.” I underestimated the heat, and the last day was beyond a joke, I thought I was going to melt. I’m no mountaineer, obviously, but I can see how these challenges can become quite addictive.

I look at my former Connacht teammate, Damien Browne and what he’s taking on. Rowing solo across the Atlantic. Climbing the highest peaks on every continent. When I played with him, he was a great competitor, but I didn’t see that he was any tougher than anyone else. Since he stopped playing, he’s clearly proven that his mental strength is incredible. I’ve nothing but absolute respect for him and what he’s achieved.

As professional rugby players, we’re goal-oriented, and that doesn’t just stop when your career is over.

You need to work hard to keep perspective.

Not long after we finished the trek up Kilimanjaro, I got word that one of the lads in our group, Kieran McNally had been diagnosed with cancer. He died last July, only six months after the climb. He was only 39 years old. It was a reminder of how cruel life can be.

The first year after retirement was challenging. I’d signed a two-year contract with Narbonne and was looking forward to playing in France. An elbow injury forced me into retirement. Not only was my opportunity in France gone, but I’d also played my last game for Leinster and Ireland and didn’t even know it at the time.

During the 2016 Six Nations we were playing France.  Jack McGrath and I had rounded on a France player to get a tackle in, but we clashed heads. Jack knocked me out. Friendly fire. Due to the concussion I was stood down for nine months. I would have played the next week if I could but Joe and the medical team, rightly so, were having none of it.

It happened at a point when I’d cemented my place in the starting team, which made it even harder to take. 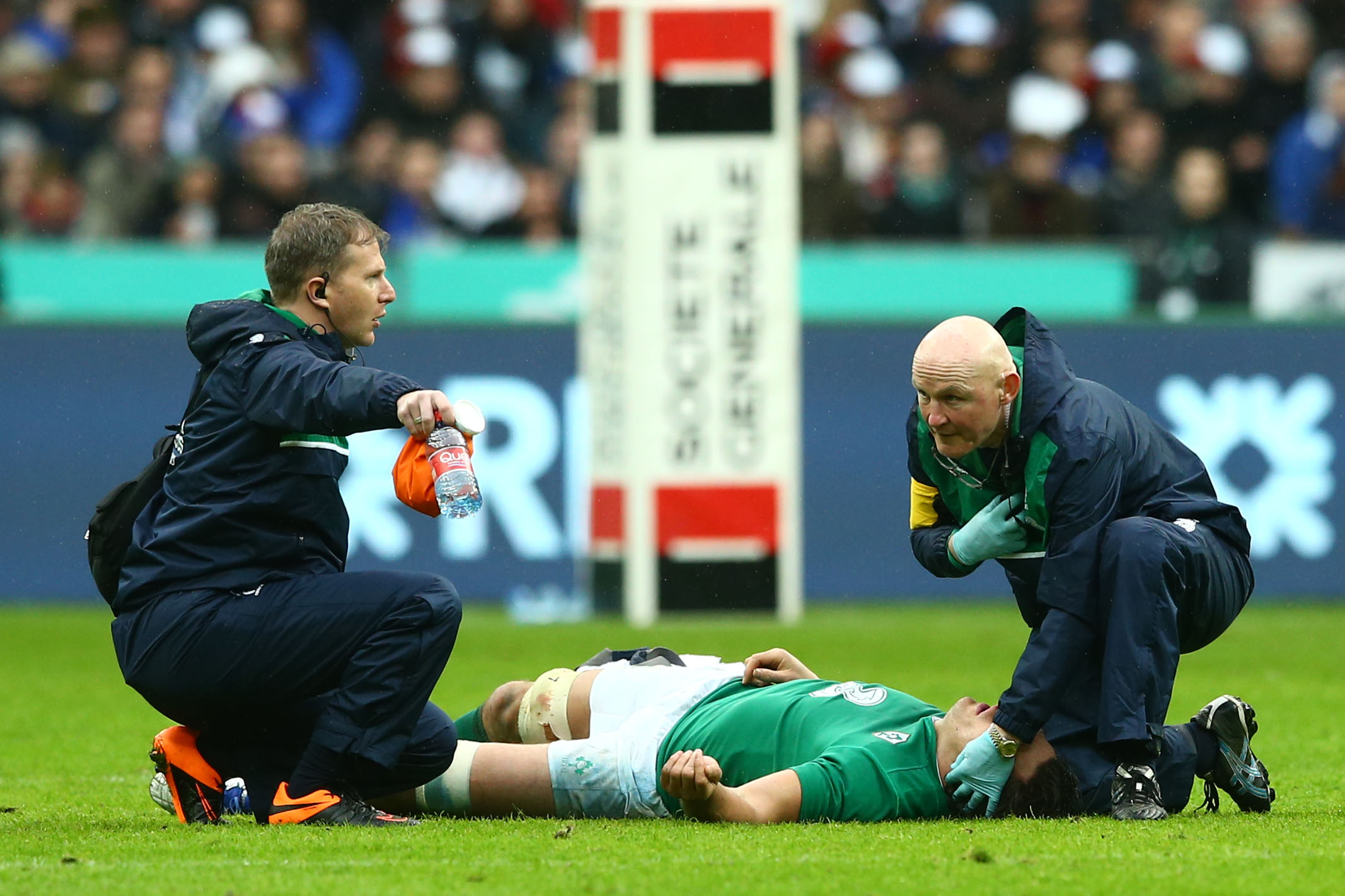 ”I had played for Ireland for the last time. No closure. That’s a big regret.

It’s up there with Leinster’s Heineken Cup semi-final loss to Toulon in extra time. Bryan Habana sprinting through for an intercept try. That’s one that got away.

I was lucky to get to play to the age of 35. Other teammates and friends didn’t get to do that and were forced to retire even younger.  I’m also proud that I have a Challenge Cup, Zurich Premiership, Pro 14 and two 6 Nations medals at home.

It doesn’t make it any easier though. No matter what age you retire, it’s like walking off the edge of a cliff.

As a pro rugby player, you’re being told where to be, when to be there, what to wear, what to eat and drink. You’re being paid to be in the shape of your life. You get your travel booked for you. It’s not normal.

Without sounding cheesy, for 17 years, we’re gladiators performing week to week. You want to be perceived as physically and mentally unbreakable.

With retirement, normality arrives. You get cut from the WhatsApp group. You pack up your stuff in your locker. You lose your identity overnight. It’s just how it is – when you’re gone your gone.

You miss the buzz of performing, the emotions of being a pro rugby player, the highs and lows, the banter and the craic in the changing room.

You have to go through a grieving process.

You’re starting at the bottom. It becomes about finding your “why?” and seeking out something you feel valued in. That takes time.

Maybe I should start MMA?

I played 19 test matches for Ireland. Some stand out more than others.

New Zealand in the Aviva in 2013, what an atmosphere that was. You empty the tank and come so close to making history only to have it taken away from you at the last second. I shed a few tears after that game. It was heart-breaking.

Joe Schmidt focused on that four and a half minutes at the end of that game where New Zealand held onto the ball, kept their discipline and ultimately won the game with the last kick.

They did to us what we should have done to them.

Joe implemented a drill that focused on putting that passage of play together, and we worked that drill over and over.

Then you see what happened in Paris in 2018. Ireland did exactly that. That’s the magic of Joe Schmidt. Every coach works hard. Joe works harder. I have never seen a coach look at the opposition and come up with plays to break down that defense the way he can.

He creates an environment where everyone works hard.

He has a saying he uses from Aristotle, “You are what you repeatedly do… Excellence is a habit.”

It’s about how every decision you make on or off the pitch must be for the benefit of the collective.

He will have got stuck into the lads after the Six Nations this year, and they look like they’re heading to Japan with a lot of confidence.

My mum raised me on her own. She’s my rock and was a role model to me growing up, showing me what hard work is. We didn’t have much, but she worked two or three jobs to send me to one of the best rugby schools in England. I got the opportunity to be a professional rugby player. She made that happen.

These days, guys are coming out of school having had already been on a sophisticated strength and conditioning programme. They’re bigger, stronger, faster. Look at James Ryan. I probably did not reach my physical peak until I was about 26.

While at University, I was over and back to Ireland, trying to get selected for the underage teams but I couldn’t break through. I had to pack it in and focus on getting a first team contract with Wasps under Warren Gatland.

At the end of the season, I was called up to the England squad to play in the U21s Rugby World Cup in South Africa.

We were queuing in the airport and the Irish squad was opposite. Then both squads ended up staying in the same team hotel. A bit awkward.

Because of that, as regards ever getting to fulfil the dream of playing for Ireland, I thought that ship had sailed. Then, Deccie Kidney called me up, and I was capped at age 29.

I played in the era of Paul O’Connell and Donncha O’Callaghan. They were in my way all the way up. My “work on” was always my discipline. I played on the edge and achieving that level of balance in my game took time. It’s about showing the coach you can stick to a system.

My first cap came against Scotland at Murrayfield in August 2011 in the run-up to the Rugby World Cup. The raw emotion of making it to the Ireland starting team after all the years of trying was huge. The biggest thrill was that my wife and my mum were there. Having my family in the stadium for that moment was a career highlight.

Another highlight came the following year. We were due to play South Africa in November 2012. I wasn’t named in the matchday squad. All week I had been playing the opposition role in training. By the Wednesday, Paulie called me aside and said he had a niggling back injury and might have to pull out of the game. So, I went from not being in the matchday squad to starting in the second row in place of Paulie.

I hadn’t trained with the team all week. I didn’t know the calls — the night before we stayed in The Shelbourne Hotel. I didn’t sleep a wink. So, there I was on the morning of the test, not prepared, no sleep, and generally not in the right state of mind to go out and perform.

As soon as I stepped onto the pitch at the Aviva, everything switched. I got this confidence from somewhere. I played my heart out, carrying well, defending well. It was probably the best game I ever played. I was awarded man of the match which was a great honour and one of my proudest moments in an Ireland jersey.

I still work in the game with the Rugby Players Association in England. My role is to work with the players to prepare them for their transition out of the game. We call it dual career; being the best you can be on and off the pitch. Its everything from education and courses to mentor programmes, networking and work placements, all geared towards life after rugby.

So, I’m still in the environment and using my learnings from the game for the benefit of current players. I can relate having played myself for so long.

Its great to be still involved within the game and give something back.

If you enjoyed Mike’s piece you might like to read Stephen Ferris’ – “The Ghosts of World Cups Past.”