Former Ireland and Leinster rugby star, Gordon D’Arcy writes about his memories of playing at the old Lansdowne Road and Aviva Stadium and shares “The Good, The Bad and The Ugly” from his decorated career.

I have some stories about Lansdowne Road and the Aviva Stadium.

It is 2004 and I’d already squeezed an entire rugby career into 24 years. But here I was, back from the edge of oblivion, a cog in the machine after all that time playing off instinct.

Scotland stand in the way of Ireland’s first Triple Crown since 1985.

Having arrived on the international scene as a shaven-headed teenager, I’d gone missing for three years. Well, I was hiding in plain sight – I wasn’t even selected for the World Cup in 2003 squad. All of that was already in my distant past. I was a centre now, doing what Eddie O’Sullivan or whoever instructed. All of a sudden, with tangible success in touching distance, the opportunity to be myself presented itself.

Smash, bang, wallop. O’Connell, under a heap of bodies, perfectly presents the ball for Strings to feed Ronan O’Gara but the plan is ruined by a wall of bodies, so the decoy runner gets the ball.

Had to go on a ramble, back in the direction from where the lineout, ruck and Rog had come.

Against the tide, down the short side, the sea opened up in front of me. Geordan Murphy appeared in the corner of my left eye. Geordie is like a Spanish footballer. Give the pass early and the ball returns in quick time with all eyes on him. I swan dived over without so much as a finger laid on me and saluted the south terrace as a pitch invader leaped on my shoulder. In that moment I’ll never forget seeing all my friends from school going nuts directly in front of where I scored.

These were still the wild west days in Lansdowne Road, they were the best days; the start of something none of us had ever seen before.

Does success breed greatness or is it the other way around, does greatness breed success?

Each flow from the same source. 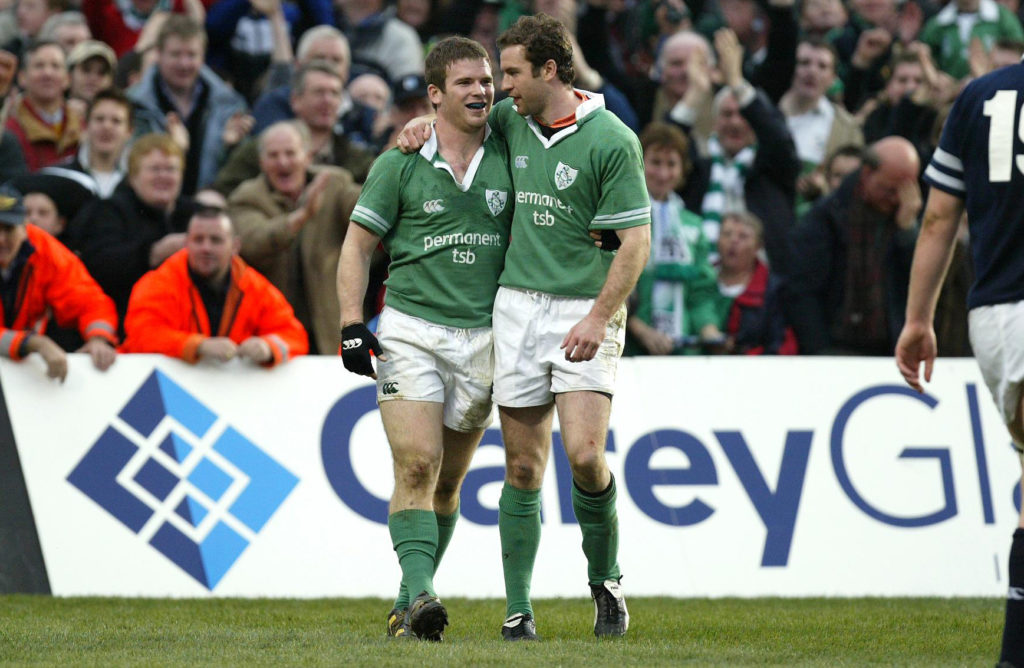 My generation of Irish rugby player was responsible for the first real continuous gathering of silverware but the desire to succeed always existed.

It came from a childhood of watching our heroes rattle into seemingly unbeatable opponents. Eventually, with the advent of professionalism, Ireland levelled the playing field against unsmiling Wallabies, Springboks, English giants and eventually, gloriously, New Zealand in November 2018.

I loved the night we beat them at home. The Aviva security didn’t enjoy herding happy headed ex-players off the premises. I think we were the last to leave, long after looking down on Jacob Stockdale tearing through the mighty All Blacks – a try that makes everything seem possible.

But my earliest memory of the stadium is Gordon Hamilton’s try at the 1991 World Cup, coming so agonisingly close to toppling a great Australian team. Then, there was Mick Galwey’s beauty to beat down England in 1993.

The roar, the near identical pitch invasions down at ‘Currow Corner’, and the general mayhem that followed showed a rising desire to discard the ‘plucky Irish’ tag.

Neither Hamilton nor Gaillimh won anything in the green jersey, but they passed on a steely determination that our Ireland team laid at the door of Stockdale and the current crop of internationals.

Usually, when you win something there is a huge sense of achievement, but it can go either way after that – the team can fall apart, or it drives the group to new heights. That was the 2004 Triple Crown. We had this piece of silverware, evidence of success, but rather than a sense of achievement, we all felt like there was more to come. It was unspoken, a subconscious desire to increase our effort every year thereafter. 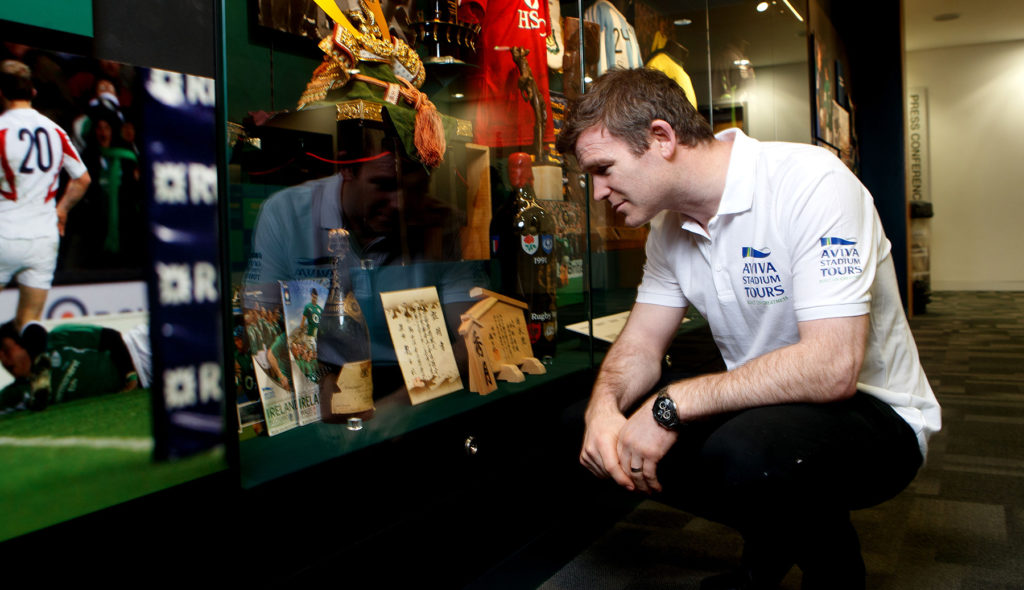 Best to start at the beginning. My first game in the old stadium was for Clongowes Wood College against Geordan Murphy’s Newbridge College way, way back in 1996. Later that same year, Geordie, my future teammate and pal, was wearing Leicester Tiger stripes. A career in rugby suddenly seemed realistic to 16-year-old me. I still can’t remember that game, cup matches whiz by in a flash. That was Lansdowne Road’s first of many valuable lessons. 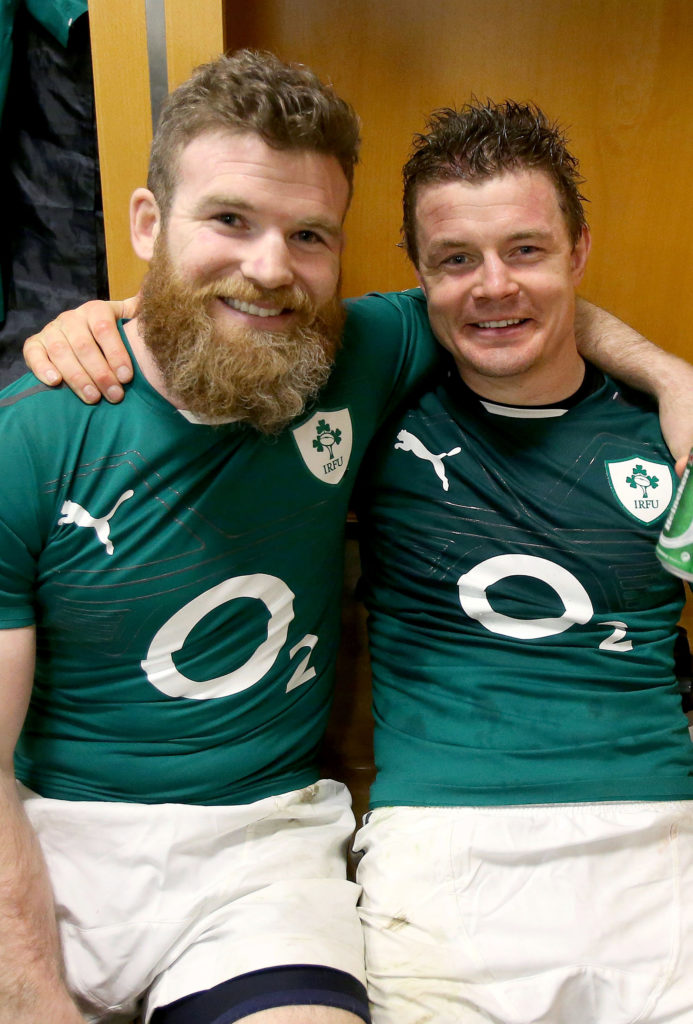 Thankfully, in ’97 and ’98 I remained in the moment long enough to leave an impression, playing four more games there for Clongowes SCT. We beat Brian O’Driscoll’s Blackrock team in the famous ’97 semi only to lose to Terenure on St Patrick’s Day. That still hurts.

A Grand Slam as well as Heineken Cups and Lions tours followed but winning and losing in the late 1990s remain some of my best and worst memories in rugby.

Thankfully there was a happy ending in ’98. Led by Des Dillon and coached by Vinnie Murray, we captured the Leinster schools senior cup in some style.

The stadium wasn’t done with me. It provided the backdrop for my first and last of 83 test caps over the course of a deeply rewarding 17 seasons as a professional athlete.

Yeah, I have some stories about Lansdowne Road and the Aviva stadium.

19-years-old against Romania during the 1999 World Cup, my test bow for Ireland was a surreal yet lovely memory. Warren Gatland offered to bring me on the tour of South Africa in June of ’98 but Vinnie and my Dad intervened.

“Get your Leaving Cert Gordon and then we’ll see about pro rugby.”

I remember boiling hot pipes in the changing rooms and Paddy ‘Rala’ O’Reilly handing out cups of tea with a ham sandwich. I was a sub, came on wearing number 16. First touch was a knock on. Second was a 60-metre break up field. This international rugby lark is easy, right? Harsh lessons came during the fun years.

Still, I like to think my stalled progress became a cautionary tale for those who came after. What will always stay with me from the Romania game was Conor O’Shea giving me his jersey (number 15) to swap, as is tradition, so I could keep my first Ireland shirt. A small gesture by Conor but it meant the world to me. 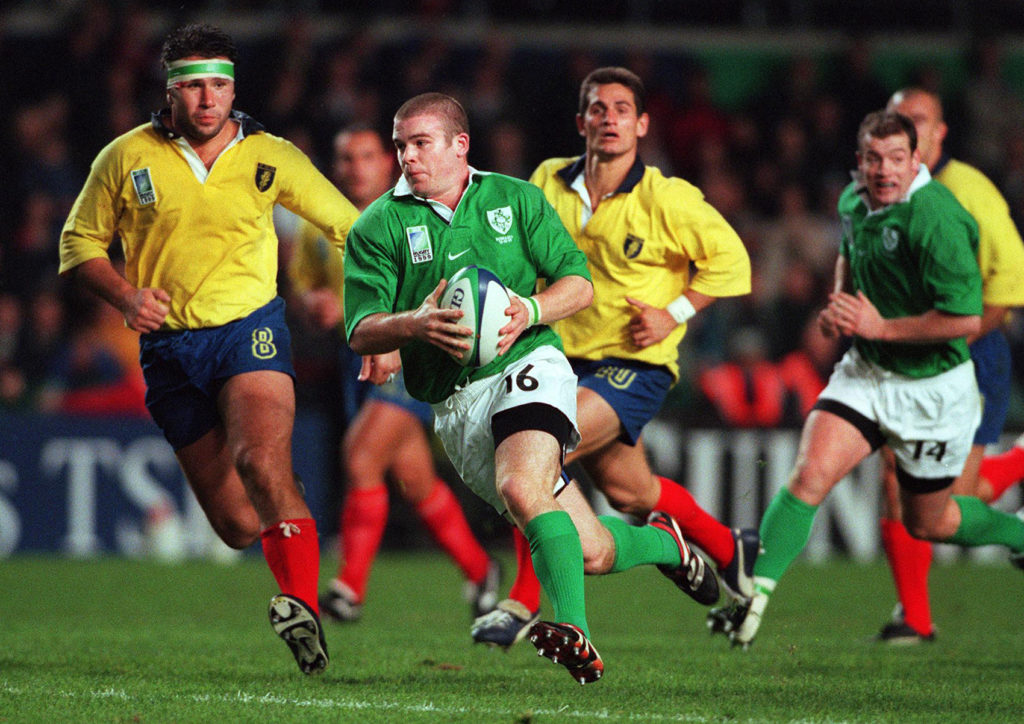 Worst memory of the stadium is easy. It will never be forgotten unfortunately, even though Leinster players and supporters have long since atoned. Jogging out to warm up before the 2006 European semi-final, for what should have been a home game, we were greeted by a sea of Munster red. We got schooled that day on and off the pitch.

My last game in the Aviva was a warm-up for the 2015 World Cup against Scotland. Last chance to make the squad. I had my suspicions, but that’s when I knew the game was done with me. It was a typical Joe Schmidt move; three set plays designed to put me in space. Sure enough I got the ball with a clear run to the try line. I presumed it was the covering winger who caught me. Turns out it was a Scottish prop. Tough moment but at least it happened in front of 50,000 people!

Seriously, I see it as the full stop in a lovely story.

Hopefully, when I’m old and grey, people might remember the Clongowes game against Blackrock or the Romania debut or the Scotland try in ’04 because that Triple Crown lit a flame in our generation to surpass every team who wore the jersey before us.

We almost did what no Ireland team had done before. So close. The last individual performance I’m truly proud of was the agonising last gasp defeat to New Zealand in 2013. Ma’a Nonu was supposed to run over me. The media had suggested as much to my face the day before. ‘Everyone is the same height from ankle to boot laces,’ I replied. Even Nonu. The theory was tested plenty of times. Even in injury time leading up to… 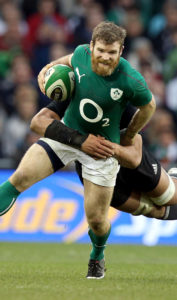 I can’t finish on that memory. How about living breathing proof that success breeds greatness and the other way around?

Stockdale’s try was instantly recognisable to a select few. Leinster ran that very same move away to Montpellier in 2011. I know this because I was wearing 12 that day instead of Bundee Aki, so I threw the pass that reverses the attack. The aim was to tempt the man at the back of the lineout into rushing up and smashing Johnny Sexton. The move is designed to punish the opposition for targeting our prized possession as it creates space elsewhere. Johnny knows he will be hit late. That’s the idea. He’s the bait.

It’s the genius of Joe and Johnny – use the opposition’s research against them. Everyone knows Ireland like to hit it up in midfield for a signature second phase attack (remember CJ Stander’s try at Twickenham, remember Paulie charging in ’04). Against Montpellier, I threw the ball into touch after their lock deliberately knocked on the pass to Isa Nacewa, so Sexton kicked three points.

Stockdale’s marvellous finish makes it a memory we can always cherish. Imagine how many more moves Joe has planned for him in Japan? He may well become the ultimate decoy.

The point is we pass lessons down from one generation to the next.

The energy inside the Aviva Stadium was unbelievable on that November night. Fitting really, that we finally beat the All Blacks in the new stadium because it is representative of the modern Ireland team. Just like the old Lansdowne Road, with all that passion and pride, reflected the teams that went before.

Thankfully, the place still serves a purpose for ex-pros. It’s where us ageing Dads get to see each other every now and again.

To tell some old and new stories.

Gordon D’Arcy helped to launch the new Aviva Stadium Tour. The new Aviva Stadium Tour provides fans with a unique behind the scenes experience of Ireland’s primary international sports’ stadium giving them not just an understanding of Ireland’s international sporting heritage but also a first-hand experience of what match day is like for our international football and rugby players. Tickets and more information about the tour can be found at www.avivastadium.ie/tours