One of the most popular personalities of Irish Athletics, World Championships finalist and New Balance athlete, Ciara Mageean, talks about learning to love her sport, that euphoric feeling of running and hoping for a return of the Olympics in 2021.

There was a time, a couple of years back, when I was asked the simple question, ‘Why do you do this sport?’. My honest and only answer was, ‘Because I’m good at it.’ I liked winning, but that was it. I couldn’t name anything else I liked about it. It had become a chore. It was a job.

Life’s too short to do something that makes you unhappy, so I had to make a change. I had to work really hard to become the best version of Ciara, not just Ciara Mageean the runner.

For me, the turning point was the 2017 European Championships in Belgrade. I failed to finish the 1500 metre final. It’s a race I’ve completely blocked out of my memory. I came home with no reason for what happened. I’d no major injuries. I was just mentally struggling with the sport.

I joined up with my coach Steve Vernon and I was honest with him from the start. He must have thought, ‘Oh great. I’ve a runner here who hates running’. It’s all about the journey. I’ve had to grow and learn about myself.

Running isn’t an individual thing for me now. I’ve a group of people I run with every day. I live with them. They’re not just my teammates, they’re my lifelong friends. I wouldn’t have that without my sport. 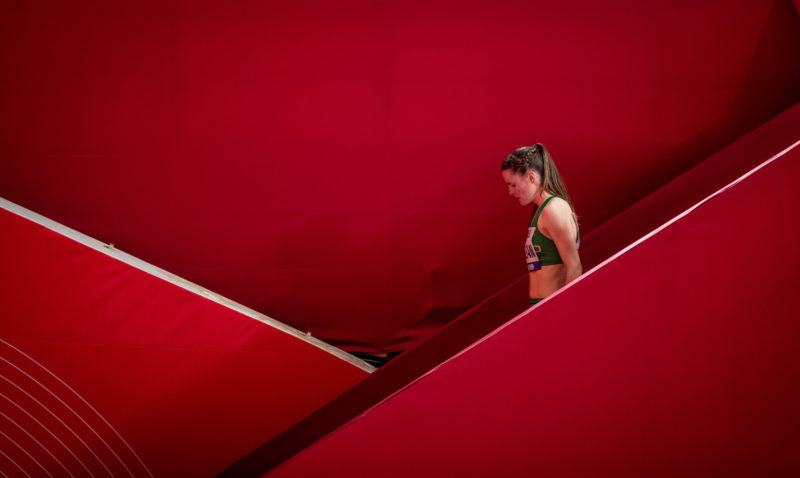 My family are back in Portaferry in County Down and my boyfriend is in Meath, so it’s been really hard not seeing them but it’s something we’re quite used to.

My teammates that I live with in Manchester all give out about me being on my phone so much, but when we checked my screen time stats it was Whatsapp that I was on the most. I just love chatting to everyone and keeping in contact.

I’ve been really lucky to have such great people in my life. I had a coach at home, Gerry Kiernan, who was so invested in me as a person, not just as an athlete which was such a breath of fresh air. He looked out for me.

One time I’d broken up with a boyfriend in Dublin and it was hard because he was a fellow runner in our training group. Gerry would ring me every night to check-in and see was I doing ok. He was nearly like a father figure in Dublin. I was so close to him. Knowing that he cared about me was huge. I admired him. Gerry had his time in athletics and he still loved it. He ran every day. He was friends with people who did athletics back in the day and he really wanted to give back to the sport. Back then, my attitude toward the sport was so far removed from his.

I played camogie and athletics in secondary school. My competitive nature thrived in sports. I loved it. I was good at it. I loved the praise.

My progression was just constantly going upwards, so it was great. Then I came to some rockier times and I found that the things that previously gave me gratification had disappeared.

I was winning medals for Ireland as a junior and everyone expected that to continue. In a sense, I’d set myself up to fail. The transition to senior isn’t easy and not many can do it.

”I realised that I had a talent and I couldn’t let those talents be pushed aside when I had the potential to become a good runner. I was determined to not let myself become another statistic of a junior who didn’t make it. I didn’t want to be another ‘could have been’.

Being an athlete for a living is amazing, but there are times when I do miss just playing sports for the love of it, like it was when I was young. I miss that naivety of going down to my local GAA club, practicing relentlessly, convinced that I was going to be the best free taker in the history of camogie.

When I ran, I’d just run. I didn’t worry about splits or anything else, I’d just go for it. I wish I had the confidence that young Ciara had. She believed she could take on anybody in the world and be the best. If I got the chance to talk to my 13-year-old self, I’d be the one asking her questions. I’d wrap her up and hold on to her fearlessness. Her naivety. Her belief that she could be the absolute best. 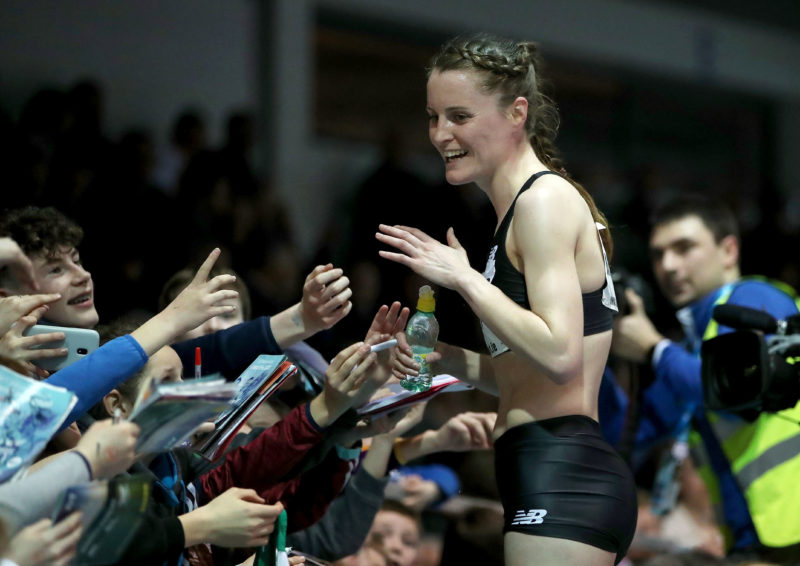 Ciara after setting a new indoor PB in the women’s 3000m final in the Athlone International Athletics Grand Prix. ©INPHO

Sport has taught me how to deal with my own demons. It’s been a rollercoaster of a journey. It’s shown me how far I’ve come.

Athletics is a high stakes game and it’s not a very glamorous life. But I don’t think there’s anything else in this world that will ever give me that feeling of sheer ecstasy that I get from running. I feel sorry that not everyone can know what that feels like.

I love that sport challenges myself to be the very best that I can be. You can travel the world and meet people and have nice things, but that sense of accomplishment is irreplaceable. There’s a beauty in being at your best.

When I look back as an old lady I can say, ‘My goodness. I got the most out of my body that I physically could get.’ Not many people will have that opportunity in life. There are not many people in the world who have felt that sensation of blood in their mouths when they’re racing. Of course, at the time I don’t like it and I’ll be on my knees afterwards in pain but, I will be so proud of where I got myself.

Racing is sort of like an out of body experience. That swarm of emotions are like nothing I’ve ever felt from anything else in my life. I compare it to skydiving.

”Are you ever more alive than that moment when your entire body is so heightened just waiting for that gun to go? Then you’re off and you’re at one with your body and the track. It’s spiritual.

I joke with my mommy that I belong to the church of running! And sometimes, my long run does take preference over Sunday mass.

I wonder will I ever feel that again with anything else in life? People talk about the moment they hold their baby for the first time. Is it the same? I don’t know. Emotions I’ll feel in other areas are there within their own right. You can’t replicate these things.

Sport awakens emotions you never knew you had. Men in particular are told by society to be emotionless beings and that crying is a weakness. It’s ridiculous. Sport allows people that outlet; a place where people are permitted to be emotional. It could be anger, frustration, elation, sadness, joy. It’s one of the most life enhancing things.

I remember racing in the London Diamond League. The stadium was electric. We set off and the crowd just went wild. I felt like I was being carried around the track. I was floating. I’ve never felt that in a race since. Moments like that I will cherish until the day I die.

Of course, I get nervous still. When I raced in Amsterdam in 2016, I was sick with nerves. I just wished the day away. I couldn’t wait for it to be over. But I won my first senior medal, a bronze. I met David Gillick afterwards and he laughed, ‘You looked like you were being tortured this morning when you were eating your breakfast’. And that’s what it felt like.

He told me, ‘Ciara, relish every moment of it because once you retire, you will spend the rest of your life trying to find something to make you feel that way again’. The older I get, the more I understand that. 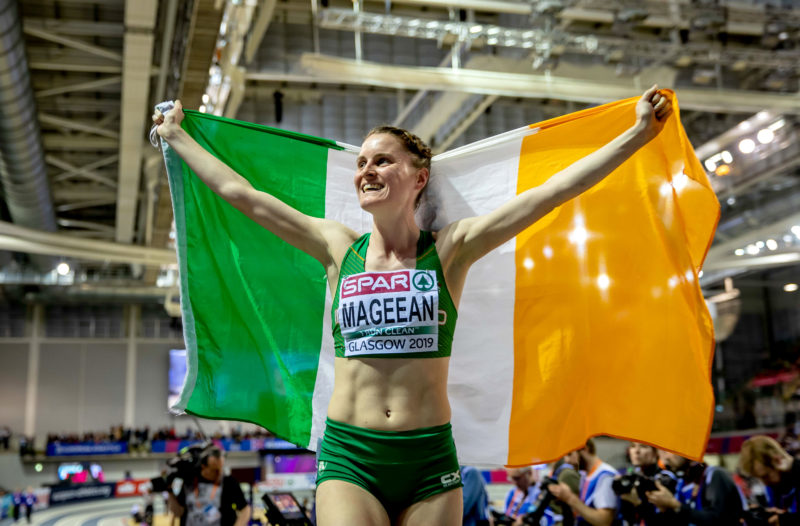 The World Championships were sort of a coming of age moment for me.

I realised for the first time that I didn’t need to be someone other people expected me to be. It’s funny how people seemed to like that. I thought, ‘Was I coming across as a complete bore before?’

We all have an image that we put out into the world and sometimes we wonder if we really open ourselves up will we be accepted? To then get such a warm response from people watching was lovely, so I thought, maybe I’ll try to be a bit more craic from now on!

I was enjoying my time on the track again. I was loving the sport again, and it showed. I’d come tenth in the world. The world!

Sometimes people look at that and think, ‘Hard luck’ which is so funny to me. I got a taxi home from the airport in Manchester afterwards and the driver was sort of asking, ‘Will you call it quits now?’

If I was the 10th most successful businessman in the world or the tenth best golfer in the world would he have had the same opinion? I couldn’t but laugh.

People bring up Sonia O’Sullivan’s records all the time, but I never get too bogged down with it.

Of course, it’s a huge compliment to be compared with Sonia. As a kid, when I was beating underage records, I thought, ‘Could I be as good as Sonia?’ She was an incredible athlete. Her stats are amazing. Then look at Catherina McKiernan. I think she’s one of the most underrated Irish sportspeople of all time. I love when I’m chatting to people and they ask what’s the Irish women’s marathon record and I throw out Catherina’s record. People are amazed. It’s not my record, but I’m so proud that this Irish record is so good.

Of course, we’re all very different athletes and the sport has changed so much overtime too.

That women’s 1500 metre in Doha was the fastest 1500 metre final in a world championship ever. Nine women went sub four minutes. If I had ran Sonia’s national record, I wouldn’t have even medaled. 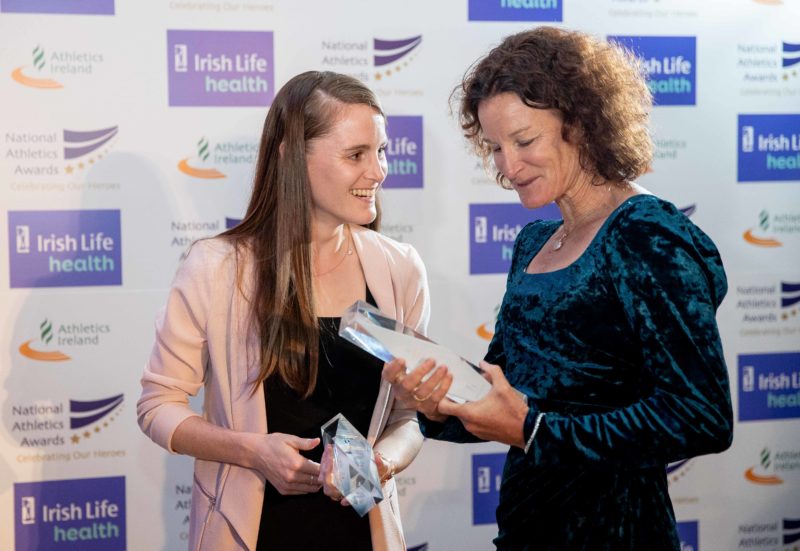 I’m at my peak now. I’m 28. I’m in my prime. I’m excited at the prospect of racing another Olympic Games. For me to win an Olympic medal, I’m probably going to have to run in the realms of what those girls were running in Doha.

That takes work so the extra year somewhat works in my favour. You can’t knock a second off your time overnight.

I sincerely hope I get a chance to compete in the Olympics, even if it’s in an empty stadium. I’ll run the race anywhere. I just want to grasp that moment now while I can. That said, I’ll just have to wait and see what happens.

Life will throw curveballs at you and it will ebb and flow. You just have to continue to look for the joy.

But without those lessons I learned along the way that have added to my armory, I wouldn’t be the person I am today.

I wouldn’t be the best Ciara Mageean that I can be.