Going With The Flow

Irish marathon record holder, Catherina McKiernan, reflects on her career, the choices athletes have to make and gaining wisdom from her children.

Being “in the zone” is a lovely place, but you can’t tell anybody how to get there.

It’s only when you achieve a good level of fitness and that competitive edge that you have a chance to experience the quiet place where there is nothing else on your mind. Just that quiet buzz in the back of your head as you run.

My coach, Joe Doonan, realised early on that there was no point coming to my races. He could be shouting words of encouragement at me, and I wouldn’t hear him because I was in that quiet place. That’s what I loved about running. It’s also what I miss the most.

It can be difficult at times talking about ‘the quiet place’ because when I retired from competing, I knew I was never going to experience that serenity again.

”Maybe that’s what you experience in your last breath. 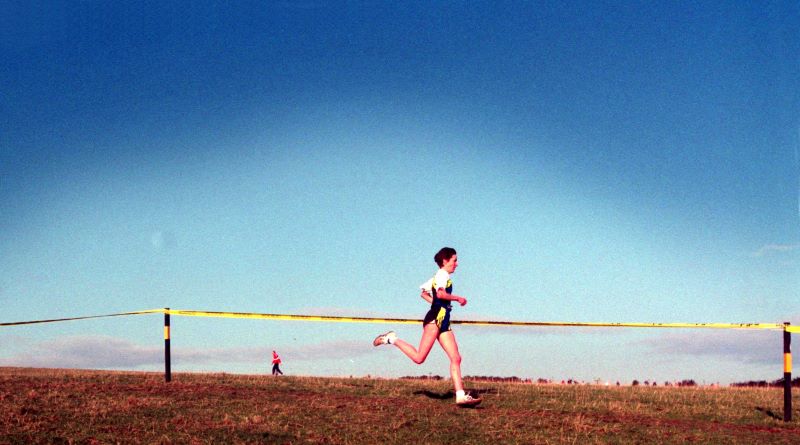 I came very late to running by most people’s standards. When I was younger, I just wasn’t drawn towards competing in athletics. The desire wasn’t there, probably because I wasn’t mature enough to experience it. So, I only started racing during my last year of secondary school.

I was lucky that I was good enough to win a lot of races which was a big incentive to keep going. It dawned on me very quickly that everyone likes to win, but not everyone can.

Growing up in rural Ireland, the boys played football, and the girls played camogie – I loved camogie. Then we played whatever was on TV at the time. During Wimbledon we would be out with our tennis racquets playing on the back street. During the soccer World Cup, we would always be out playing soccer.

Sport and being active was always a big part of my life. Being the youngest of seven children, my father couldn’t bring us everywhere in the car. If we wanted to go somewhere, we would have to either walk, run or cycle. It meant I was building up an aerobic capacity without even realising it.

For the bulk of my athletics career, I lived at home. Olympian and journalist, Tom O’Riordan, used to ring my home before any big race. I always knew that the call would be coming. It could be the Friday before the race on a Sunday. He would look for a few quotes and have a bit of a chat. Tom once described interviewing me as being like “pulling teeth”.

He knew my movements. He knew when to get me in the house. I’d have my mother warned, “if any of the journalists ring, I’m not here”. The phone would ring, and my mother would chat away for a few minutes until I’d hear her say “she’s here, I’ll get her for you now”. Her religious devotion wouldn’t allow her to tell a lie to Tom.

When things got really serious with my running, and I was winning big races, we got an answering machine at home, and she would go bananas because when the phone rang, she wanted to know who it was! I hated talking about running before any of my races but not as much as my mother loved chatting on the phone. 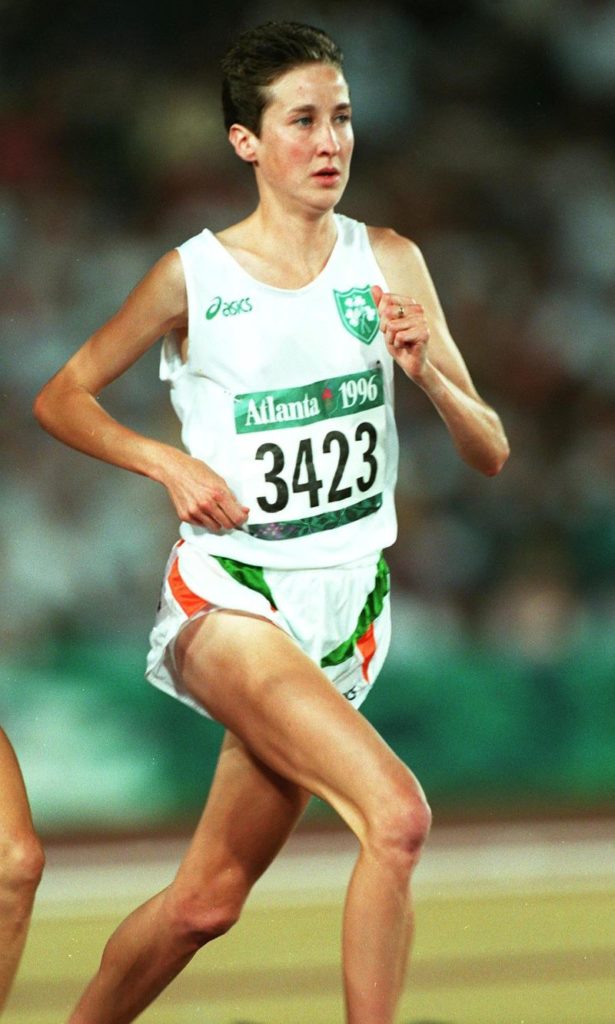 I worked with Cavan County Council, which gave me the balance I needed in life. Being a full-time athlete never would have suited me. There was too much pressure attached. My sport is a solitary one. In team sports, there’s someone to pass the ball to, share the load. In athletics, the pressure can be overwhelming if you let it. My job gave me respite from the pressure of competing.

”Working with people who had no interest in running really worked for me.

My ability to manage pressure directly impacted the results of my races. Looking back, the races I always performed well were when I didn’t think about the race. I ran some very good Grand Prix races abroad that nobody knew I was running in. There were no expectations because nobody knew I was there.

Running aside, in everyday life if we can quiet the mind, that’s when we’re at our best. When we think too much, and try to figure things out, and analyse things, and talk about things that are negative – that’s not healthy.

I had a tilt at running the world record for the marathon in Amsterdam in 1998. My coach would never have said to me “we’re going for the World Record.” Joe was very like me in that sense, and we tried to keep away from all the hype before races. As I’ve often said before “I like to let my legs do the talking.”

In the weeks leading up to the race, he could see that I was in good shape, and potentially able to run a fast time.

The race was set up as a world record attempt, and there were pacemakers there on the day. I never knew about any of that organising, that was down to Joe. My role was just to go out and run.

I was 92 seconds outside of the world record at the time. Hindsight is a great thing, but I know I could have run faster. I trusted the pacemakers were doing their job, so I went along with them. We ended up a minute and a half slower than I had expected.

It’s not something I dwell on too much. I won the race, and it was a national record, so in my eyes that’s a good day’s work.

Luck was working in my favour when Sonia O’Sullivan was put on the planet the same time as me. We are born only two days apart. I was fortunate she was around.

The media did their best to paint this rivalry between the two of us, but neither of us were interested in it. Both of us understood how hard the other one trained to achieve what we did. I respected Sonia because she had a phenomenal career, and I’m sure she respected me in the same way.

We competed alongside each other for Ireland in European and World Cross Country Championships. When representing your country, you aim to be the first athlete across the line in a green vest. I wanted to beat Sonia, and she wanted to beat me, and that’s natural whether she was from Ireland, France, Germany or Portugal it made no difference. It was friendly competition, but it was never a rivalry. 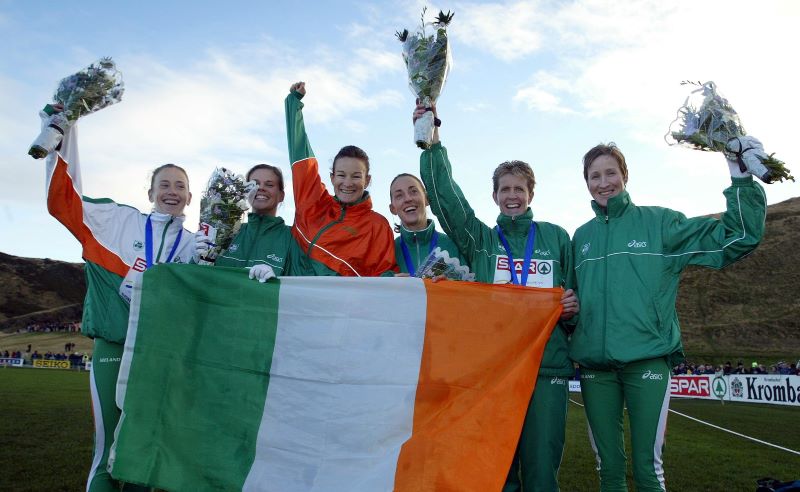 Being from rural Ireland, I knew I had the ability to bring people joy by winning races. That was a huge driving force for me. During some of my toughest races when I had to dig deep, I would think about my family and the people at home in Cavan and around the country who were supporting me.

”I wanted to give them something to be happy about and the chance to do that drove me to the finish line.

After I won the London Marathon, my aunt Annie, who lives in Nottingham, had people coming up to her at the church and congratulating her on my achievement. That gave me a lot of satisfaction because people acknowledged the magnitude of the win and were able to give my aunt a little bit of joy as well. She’s 93-years-young this year and has always been a massive supporter of mine.

Training by myself going up and down the hills of Cavan golf course in snow, rain, and wind. That’s what got me through it – bringing joy.

Everyone is talking about drugs; they don’t talk about the good performances as such. For me, running is simple, and running should be pure and enjoyable. When you look at the World Athletics Championships or recent world records you hear people talking about individual achievements it is always raises speculation.

I was probably a little bit naïve, but the idea that athletes might be doping wasn’t something that would go through my mind when I was competing.

If the present day athletes want to get the most out of themselves, they shouldn’t entertain this negative aspect of the sport. They have no control what other people do. Instead they should continue to put all their energy and focus into being the best the possibly can be.

I believe strongly in the law of attraction and the concept of free will. These athletes didn’t manage to get caught in a bad situation. These athletes are attracted to the coaches that are known to be ‘messing’ with banned substances. They always have a choice.

For those who haven’t been caught, it mightn’t affect them now as they are in the height of their careers and they are totally zoned in, but it will come back to haunt them.

When they retire and show their children and grandchildren their medals and tell them what they achieved, they will be carrying a lot of guilt. I often think, “how after a race, can they grab their national flag and do a lap of honour knowing that they’re cheating?” It’s not simple, and it’s not pure, as it should be.

Like everything in life, things have improved and are more scientific.  People are going to be running faster. The negative talk about drugs in athletics doesn’t make me feel good, so I try not to focus on it.  It’s like trying to control the uncontrollable. There are a lot of talented and gifted athletes that are working extremely hard and my hope is that they have plenty of luck on their journey and reach their full potential. 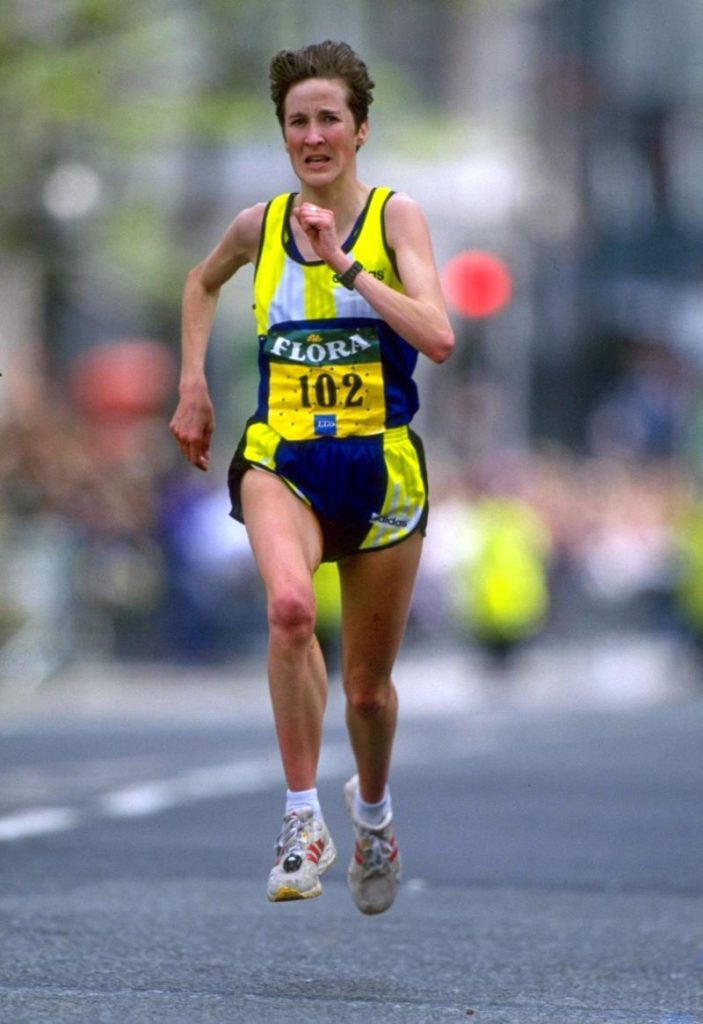 Catherina McKiernan on her way to winning the 1998 Flora London Marathon. ©INPHO/Allsport

I had my first child Deirbhile a year after I made the decision to stop racing which helped me with the process of letting go. She kept me occupied and filled the gap that left with the feeling of competing.

Patrick was born 4 years later. I enjoyed raring the children. It was a new chapter in my life and took up so much of my time. So much so that I didn’t miss running.

I enjoyed watching all their stages of growing up, but when they got a bit more independent and didn’t need me as much, I did begin to miss the running.

For a while I was running for the wrong reasons, trying to find a feeling of self-worth.   I began to get tired of pushing myself in races and found I wasn’t enjoying it anymore.

I needed a break.

”The light bulb moment was when my son Patrick said to me, “you’ve been pressured emotionally and physically. You need to rest your soul.” 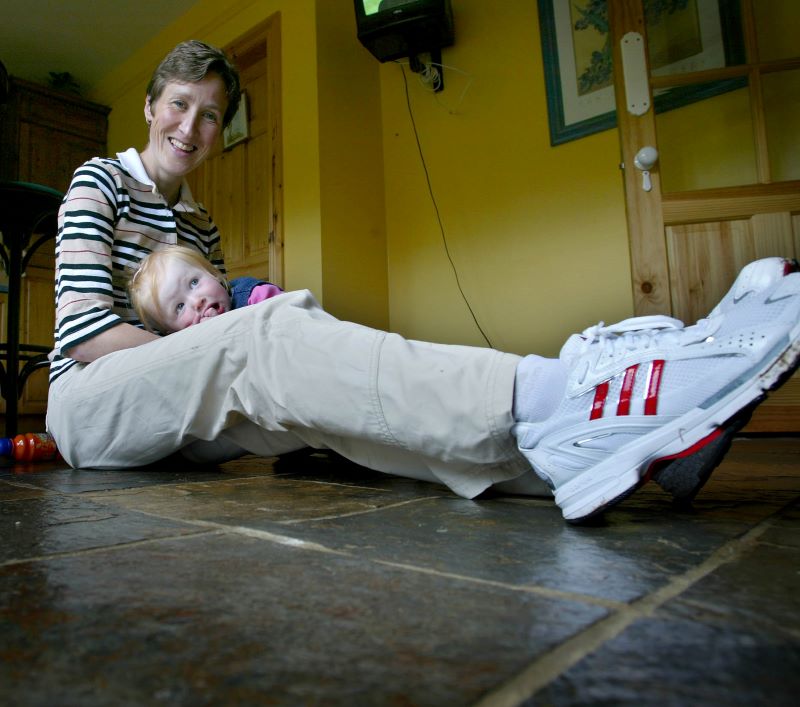 He’s a very special boy, and I’m lucky to have him.

My father used to tell me to rest a lot, and my manager in the county council office used to tell me to “rest and smell the roses” and I would never really listen to them. But when your 13-year-old son tells you something like that, it really sinks in.