Kilkenny camogie legend and multiple All-Ireland winner as a player and manager, Ann Downey reflects on her stellar career in GAA and how the pandemic has forced us all to slow down and reevaluate.

I love the sheer excitement of the GAA. If you have a game on Sunday, you’re planning your week around it. That match day buzz is hard to explain to someone who’s never experienced it.

You meet the very best people in sport. I’ve always said that and that’ll be my opinion until the day I die.

It’s all consuming. It brings everyone together. I often wondered – and I wondered it regularly during lockdown – for the people who are not involved in sport, what are you doing?

It’s why this pandemic has hit the GAA community so hard. It’s a big loss to a lot of people. But if you were to take some positives from it, you’d say it was a grounding experience. It felt like we were all going 100 miles an hour thinking of ourselves and no one else.

When life slows down you get a better appreciation for what you have and what you had.

I had a wonderful career as a player. I’m grateful for that.

I’ll put my hand up. I was mouthy. I was tough. I wouldn’t suffer fools lightly when I was playing.

My twin sister Angela, on the other hand, just went out and let her game do the talking for her. 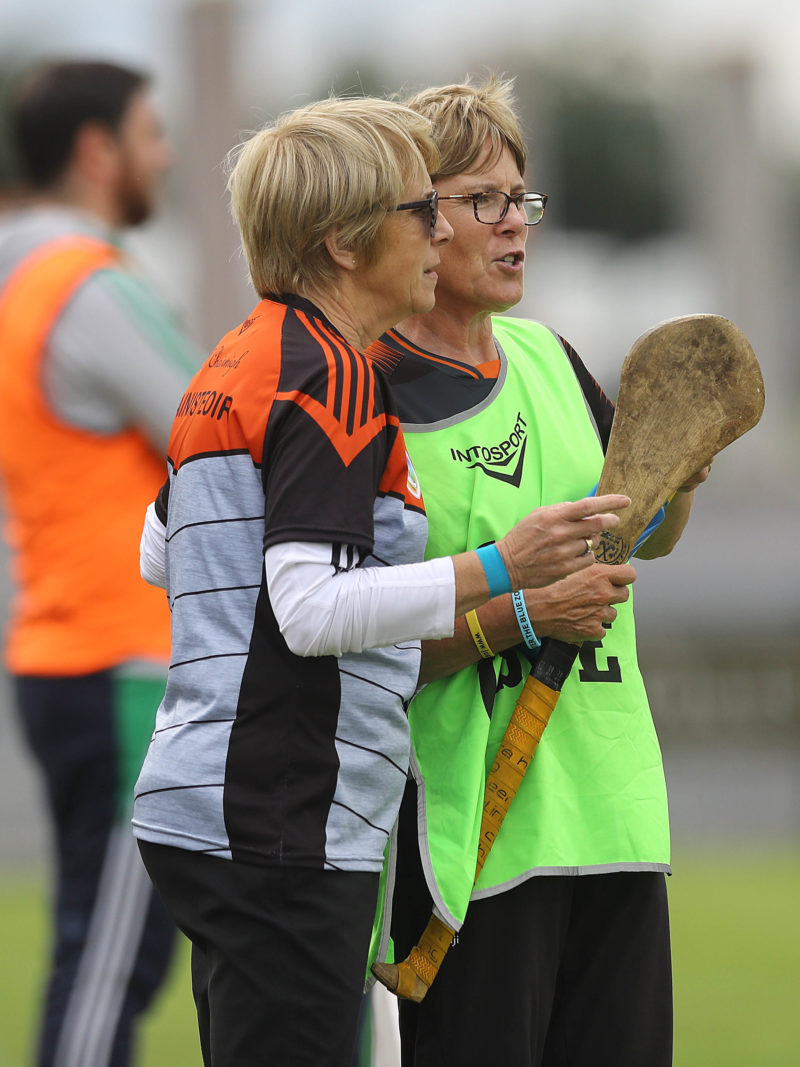 There were five of us in family altogether. Ballyragget where we grew up was a quiet village. We had no industry until Glanbia arrived.

We’d spend all day out in the garden keeping each other entertained or pucking the ball up and down the road. At that time, you’d have to wait 20 minutes or so before you’d have to move in off the road to let a car pass.

Our father won a junior All-Ireland with Kilkenny in 1946 and a senior in 1947. When we were born there wasn’t a whole lot to do, so sport really brought the whole family together. If we weren’t rushing off to Tullamore to go running with the Harriers running club, we were packing the car to head to Wexford for a game of camogie.

We just had a grá for sport and it was always encouraged. Our parents wanted us playing sports to keep out of trouble. It was a real family affair.

If we weren’t playing at the weekend, we’d be out supporting our local club. Unbeknownst to our mother, Daddy used to drive down to Callan when we were in boarding school on a Wednesday evening to bring us to training. Our entire lives just revolved around GAA.

Pictured is St Pats Ballyragget Intermediate Hurling Manager and multiple All-Ireland winning former camogie player and manager Ann Downey ahead of Chapter Five of AIB’s The Toughest Summer, a documentary which tells the story of Summer 2020 which saw an unprecedented halt to Gaelic Games. ©Ramsey Cardy/Sportsfile

Angela was 15 when she played in her first All-Ireland in 1972. I wasn’t on the team yet, but I remember it well. They were beaten by Cork by a point. By the time they reached their next All Ireland in 1974 I was a sub. I’d made it onto the panel, and I was delighted.

That day, Angela was marking Hannah Cotter, a teacher in Loretto in Carlow. At the end of the game the ball came down and Hannah dropped her hurl and caught the ball with both hands, winning us a free to level the game.

We went on to win the replay which was absolutely fantastic.

The following year we were doing our Leaving Certificate Irish orals and who was sitting waiting to examine us only, Ms Cotter! Our mother always said, ‘You’d never have got your Irish only for Hannah Cotter’. Maybe we wouldn’t have got the All–Ireland without her either!

Like everything in life, sport moves on too. College camogie is special because you only have one or two years to grab that chance of winning with your school.

We reached the colleges All–Ireland in 1975 and were beaten in extra time by a really good Athenry team. To lose in Croke Park, after extra time was absolutely devastating.

The wins are great and are memorable days, but the losses stick with you. They linger. But you dust yourself down and focus on the next game. 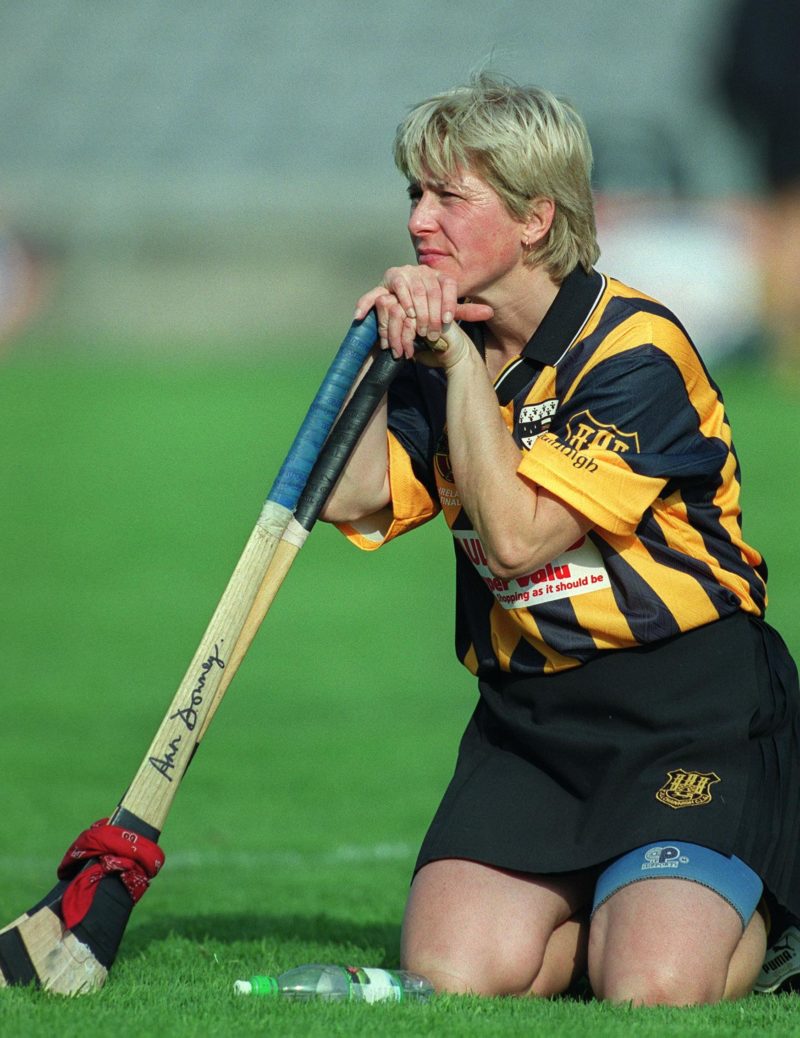 ”Sport is a great leveller that way. It helps you to cope. It gives you the tools you need to deal with the tough parts of life.

In 1998, we were playing Killeagh from Cork in a club All–Ireland semi-final at home in Kilkenny. It was a tasty game.

It was hot and heavy between Angela and the girl she was marking. A tussle occurred and they went to ground, and all hell broke loose on the sideline.

Sledging wasn’t around when we were playing but there were vicious verbals coming from the sideline that day.

Angela wasn’t sent off. She wasn’t booked. Her name wasn’t even taken by the referee. We won by a point but in the dressing room afterwards Angela was in a state. I’d never seen her so upset in all my life.

We were due to travel to Galway on the Sunday to play the All–Ireland and the night before my father called Angela into the shop.

‘No match tomorrow’, he said.

‘Who died?’ Angela asked. He told her no one had died but she’d been summoned to a Central Council meeting in Dublin the following week.

In our minds, she was made an example of and that was wrong. There is so much about it that we still don’t understand but we will never get answers.

When I look back on my career there are some things that I didn’t like that I can’t let go, even now.

Angela being banned is something that will bother me until the day I die. 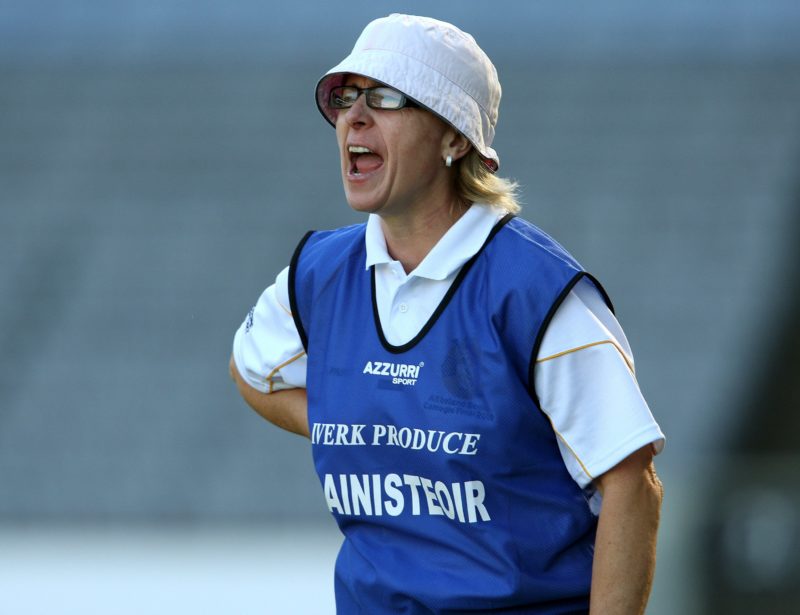 I was never a referee’s favourite as a player, or as a manager.

A lot of men do not like to be chastised by a woman. That’s just the fact of the matter.

It’s incredibly frustrating on the sideline when you feel that decisions are going against you. As a woman, I feel I can’t say anything to the officials. They won’t take it. You just have to put up and shut up.

What keeps me coming back is knowing that the teams I coach respect me. My peers respect me. I’d call up Brian Cody, Martin Fogarty, Michael Dempsey anytime for anything and I’d be treated as their equal. That’s all you’d want, a mutual respect. 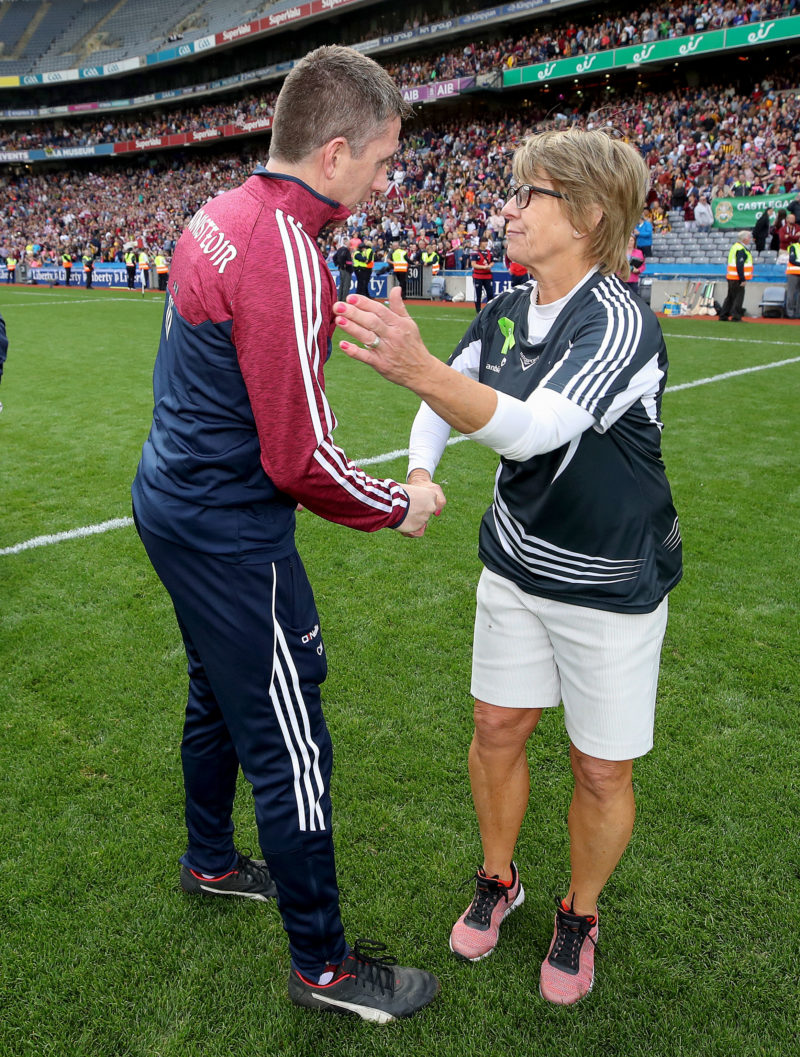 Kilkenny camogie had been so good to me and my family, I was more than happy to be able to give something back over the years as manager. But last year, I knew heading into that All–Ireland Final against Galway that it would be my last.

I don’t like losing, but we lost to the better team that day. Those Galway girls are a smashing bunch and they’d been knocking at our door for a long time. After all their trials and tribulations, they finally got over the line. You can’t begrudge that.

I’d never have left if I couldn’t find a replacement that I knew the girls would be happy with. When Brian Dowling agreed to stay on, I knew I was leaving them in good hands. After all they’d given me, their commitment and their efforts, I didn’t want to leave them in the lurch.

The year before when I’d considered leaving a few of them called to the house to make sure I’d stay on. I got cards and presents and handwritten letters from them last year, things I didn’t expect. They meant the world to me. I was so grateful. They appreciated everything that was done for them and that’s all I can ask. That mutual respect was there.

”Young girls need to see the Katie Powers, the Ursula Jacobs, and Rena Buckleys of the world. They need to see that they can work hard and reach Croke Park levels one day. That’s every Gael’s dream isn’t it? To play in Croke Park.

The game has grown dramatically since my time. It’s wonderful to see. Over the last few years camogie has got more exposure, and that’s what the game needs.

I think the way forward is having camogie matches as the curtain raiser to the senior men’s hurling league games. We played our All–Ireland semi-final against Galway in Thurles in 2016 and Kilkenny and Waterford were playing in a hurling replay. The crowds coming for the hurling caught the second half of our game and most of them couldn’t believe the skill. It has to be seen.

It was always my dream since I was a young girl to play for Kilkenny in Croke Park.

If I could talk to that young girl now, I’d say to try to enjoy it more. Appreciate what you have. Relax!

When you’re in the middle of something whether it be sport or the pandemic, it’s hard not to get wound up in it all. Life goes on, and there’ll be better days ahead.

So, all you can do is try to live in the moment, and enjoy it.

Ann Downey features in AIB’s The Toughest Summer, a documentary which tells the story of Summer 2020 which saw an unprecedented halt to Gaelic Games. The series is made up of five webisodes as well as a full-length documentary to air on RTÉ One on Tuesday, August 25th at 10:10pm.