There is a bit of the psychologist in Cody

I surprised myself as much as anyone else by moving into management so quickly.

Retiring from inter-county hurling wasn’t so bad because I was going back to Ballyhale to keep playing. The club has always provided refuge. When that abruptly ended I really needed to make a decision about my future.

People might wonder why I’d do this to myself so soon after retiring but what made my mind up to manage the club was a desire to keep doing something genuinely competitive. I’m coming from the ultimate high of playing in Croke Park in front of 82,000. You are slamming into JJ Delaney and Tommy Walsh night after night to prime yourself. I can close that chapter of my life but what is waiting for me when I turn the page?

”I can't just take it easy.

This is a massive challenge completely outside my comfort zone. I crave that. The club’s recent success at underage convinces me there is a good enough panel to win a Kilkenny championship.

So we’ll go after that.

Last year I was still heading off on summer days to play All County Leagues around Kilkenny. One such evening I had four or five points from play, galloping about like I was in my twenties until I came down heavy and twisted the knee.

The cruciate is a terrible injury. Your leg wastes away. That night I dreaded it had snapped again. I’d gone under the knife far too much since 2010. The anaesthetics putting you asleep almost every season, waking up in the hospital disorientated and dealing with pain each morning, being dependent on your young wife and kids – that takes a heavy toll. 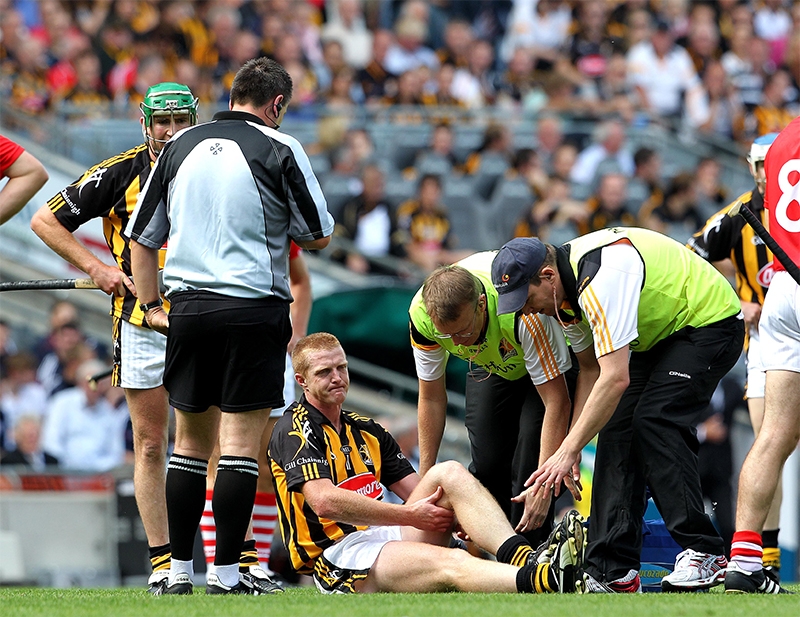 Turns out I was wrong, the ligament held, but the knee never came right.

”When I couldn't play in the county semi-final – we lost to James Stephens – I knew it was over.

My 38 year old body pleaded for mercy. I love playing but I couldn’t go through the torturous rehab anymore. I first did my cruciate in 2007 and again in the 2010 All-Ireland semi-final against Cork (coming back for my 13 minute cameo in the final).

Did the shoulder in the 2011 county semi-final after a really good season but the worst was still to come: the Lisfranc injury is when the ligaments over the metatarsals are ripped off the bone. This happened late in 2012.

I tried to rush back in 2013 (to ensure I never missed a championship game) but I didn’t make it for the Dublin defeat. I managed to take the field in Nowlan Park against Tipperary in what remains the best atmosphere I ever played in. A scorching hot July day with so much at stake; Tipp coming to our field to knock us out of the championship.

We refused to bend. 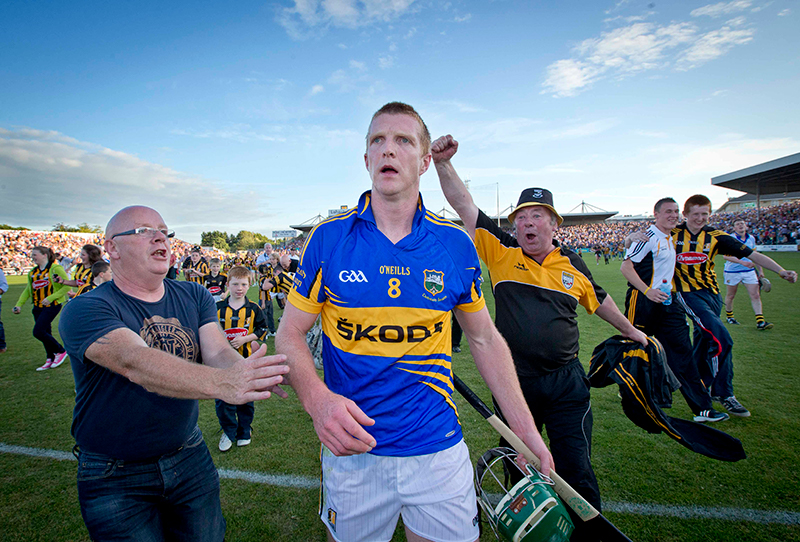 That summer ended too soon after I was sent off against Cork in Thurles (the rescinded yellow cards) but all the pressure I put on myself led to stress fractures in the foot which ensured I didn’t start the 2014 championship either. I needed more shoulder surgery in April 2015 after the club All-Ireland final. When the knee went in 2017 I’d had enough.

I don’t want to sound like a martyr. Injury is a sporting reality and nothing compares to what my son, Henry Junior, went through after his accident in 2016. He taught me so much about life during those harrowing few days, never once complaining despite six operations on his foot.

But every year something was breaking down and the recovery process only gets harder because you know what needs doing; climbing out of bed at 6am for 30 minutes on a pulley tied from the conservatory door trying to get the shoulder functioning before driving to work. Life was being lived on crutches or in a sling. Fumbling with a kit bag and keys getting out of the car, needing Deirdre or the kids to prop up cushions behind the man who is supposed to be the father of the house.

All the while you are mentally drained by the stress of having to prove your fitness as the days tick down to championship.

When hurling finally finished it felt strange even thinking about going down to watch Ballyhale, and not being involved anymore. There was a vague short term plan to train another club with a mind to bringing home what I learn.
The other option – stopping to smell the roses – was abandoned by a knock on the door a week after we lost to James Stephens. Andy Moloney and Colm Bonnar decided to step away so our chairman, John Kenneally, arrived at the house to see if I would be interested in taking over.

Is there a better way to start out in management then surrounded by your own people?

Still, I needed some time to be sure.

”For all the support I've always got around home they will be my harshest critic now I'm wearing the bainisteoir bib. That's the terrible beauty of the GAA.

First off I needed a trainer I trusted, someone with actual experience. Tommy, my brother, coached us when we won a county title in 2012 and he was looking to get back involved.

You can be the best hurler in the world but without intelligent players around you nothing will be won. Management is the same. I wanted the right blend of selectors; Paddy Phelan knows the underage teams in the club and Richie O’Neill, who was with the Kilkenny under-21s, gives us an important perspective from outside the parish.

We have knitted together nicely but there’s so many issues to consider. I can no longer be one of the lads. The social dynamic had to change. Even with Michael and Colin Fennelly, Joey Holden and TJ Reid, all good friends of mine, I am their manager now. Different whatsapp groups. When the players go for a few drinks after a match the management will meet some place else.

The new “club month” has just passed. Ballyhale had one match. That’s been frustrating. We want to be coaching players off the back of their performances. That’s how you help them improve. The weather in the early months of the year had me busy rescheduling matches, sorting out referees, physios…something different every day. That makes Tommy’s role very important as I haven’t been able to get my hands dirty on the coaching side.
Not yet.

One of the best lessons I take into management came from my last year as a Kilkenny hurler. The foot problems meant I went from being the star player to sitting in the stand, mad to be out there, with no influence on the start of games. Winning the tenth medal was an amazing way to finish my career and I did deliver the last ball into Colin Fennelly for our insurance point but those last few months, battling injury to get 20, 25 minutes in games, will stand to me if I do go further in management.

The other night I let the whistle hang around my neck and picked up the hurl. Just to slam a few balls about. It got me thinking… then I tried a volley playing soccer with the kids and my knee nearly gave way. The right decision has been made.

”I am very clear about which side of the line I belong but try telling that to the 36 year old hurler who has won everything. Maybe I'll have to do that at some stage.

Kilkenny is a small place. I recently met Brian Cody at a wedding. Of course I was asking away about how certain players are going. Sure what else would we talk about? 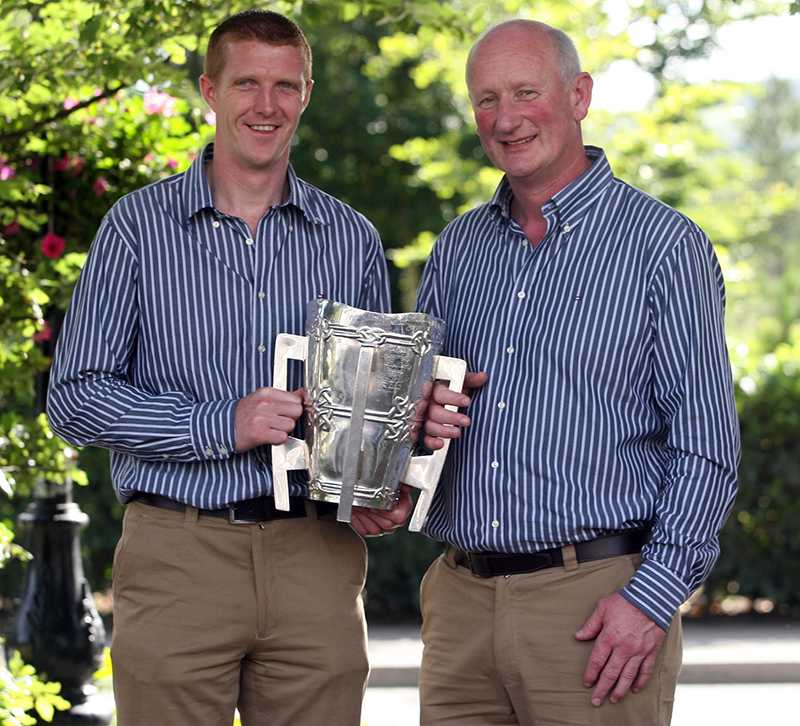 Inter-county management feels like a long way off. I want to see how much I get from being a club manager. I am enjoying it but there is a steep learning curve ahead, mostly because I didn’t do some coaching beforehand, but that’s just the way it unfolded.

I have a fair idea about what is required after all those sessions under Nowlan Park lights. The mystique around Kilkenny’s hidden games remains intact. People walking by could hear clashing ash but rarely the shrill of a whistle. Brian is not much of a referee. You would get badly fouled and he’d turn into a statue. Afterwards he would have to admonish Jackie or Tommy or JJ for some awful swipe: “You won’t get away with that in a championship match.” The boys would nod but come throw-in Sunday they’d inflict the same punishment on enemy forwards.

Those games were 100 miles per hour, everyone flying up and down the field, we had incredible depth of quality. Almost everyone on the pitch would find a starting position in other inter-county teams.

”Outside Nowlan Park, Seán Óg Ó hAilpín was the toughest opponent I came across but Tommy and JJ were, by far, the hardest defenders I ever encountered. I had to mark them 30 or 40 times a year.

Uncompromising, special days wearing the black and amber. After watching the National League those days might be coming again. 12 months ago I wouldn’t be so sure but that’s the magic of how quickly it can turn. On any day I can drive through the streets of Kilkenny and see a seven year old making the ball talk. It’s no secret that hurling is the number one sport down here. We don’t have rugby, football or soccer clubs pulling at our young talent. The best hurlers always tend to be good at everything else so that’s our major advantage.

Skill levels will never be a problem, but for many years we didn’t need a conveyor belt, just one or two coming off the line to freshen up a panel that was ravenous for continued success.

Brian, I think, identified the need to change that mindset. It’s no longer a case of adding a Walter Walsh or Richie Hogan every couple of seasons. That’s why he had 50 or 60 players in for training earlier in the year. These underage “stars” would have seen just how much work is required to build a successful senior team.

There is a bit of the psychologist in Cody. You might be struggling for form after injury or be stuck in a rut at training. Tommy, JJ or whoever would sense as much and be stickier than usual. You might get loose for a point near the end which Brian would jump all over.

Jesus, maybe I am.

Rare words of encouragement from Cody. Sometimes that’s all management is about. I can already see there is no magic formula. It’s about getting the small things right. This year’s league for Kilkenny was about building confidence. I could see that even during the early defeats to Cork and Clare. Here was the mastery of Brian. He got more numbers in than usual, creating fresh competition, training them really hard so they hit higher notes as the league wore on.

It went from ‘Cody is finished’ to ‘Kilkenny can win the All-Ireland!’ The media have to predict the demise of someone who has been in a job for so long, that’s just the nature of the business I suppose, but for us, for people in Kilkenny, after so many great September days we have no problem placing our trust in Brian Cody. That has never waivered. Not for me anyway.
I take his lessons with me wherever I go.

In “Mammy, why is Daddy so upset?”, Henry Shefflin describes the appreciation he has for his family, read it here.