I Don’t Fear For Our Game

Here’s what I know. No matter what rule is brought into Gaelic football, the best teams and cleverest tacticians are going to make it work to their advantage.

Look at the longest serving inter-county managers – Malachy O’Rourke, Jim Gavin, Mickey Harte – they are still around for a reason. The rules are about to be altered but not as quick as the game evolves, that’s because of these managers and the people around them. 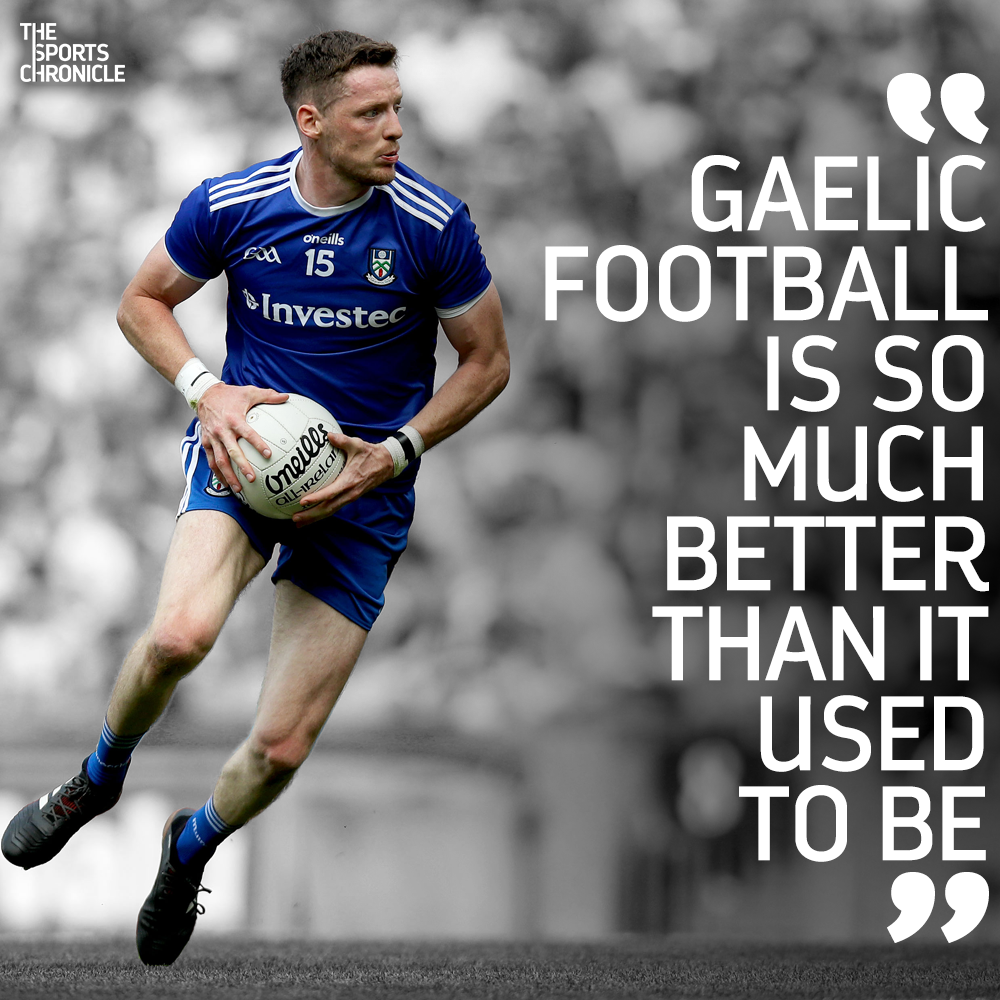 I accept we need to constantly look at our sport, and something isn’t right, we can all see that.

I just think there is too much tinkering going on at the minute.

Football isn’t as defensive as it once was. Scoring averages are rising so I don’t fear for our game.

Not sure people are willing to admit that. We come from a fairly low base when it comes to spectacles. People can get hung up on the past. Rose tinted memories. The good old 1990s when we cheered for whichever team came out of Ulster.

Almost everyone in Monaghan used to support Down, and Mickey Linden in particular, because of their success but also their history, going all the way back to my Grandad’s stories about the great 1960s team that first took Sam Maguire north.

It was black and white – you follow the Ulster champions down to Dublin. The back door has delivered shades of grey and some wonderful experiences for Monaghan people, especially this summer in Dungarvan, Carrick-on-Shannon, Navan, Croke Park (twice), back up to Clones, and that lovely evening in Salthill. 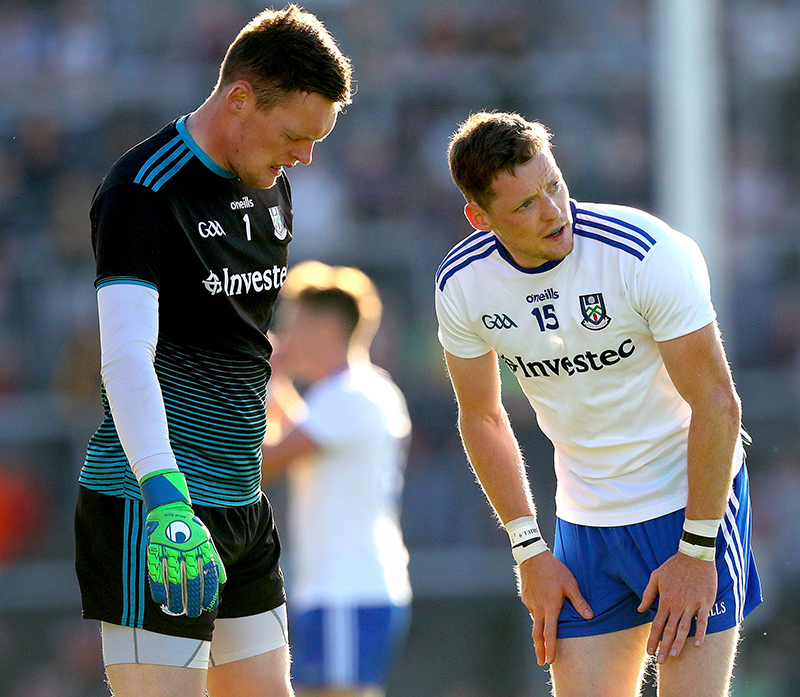 So many supporters were with us all the way. Pity how it ended. We’d have loved to have given them one more day.

But look at the games in the early 2000s and come back to me, I guarantee you will appreciate more what we have now.

Gaelic football is always there to be manipulated. What changed was the northern teams at the turn of the century had had enough with Kerry and the likes out-footballing them. Enough of being lambs to the slaughter. Ulster football took tactics to a different level.

We began thinking about the game in a deeper way. We saw its flaws and made it work for us. I was a teenager watching Oisin McConville and Peter Canavan do what needed doing to win in August and September.

(As a young wing back for Clontibert against Crossmaglen I’d a tough experience marking McConville).

New rules are coming. Now, the game does need some tidying up, and I’m all for the forward kicking mark – that could turn things for the better – but the three hand-pass rule is only going to heap pressure on referees. They have too much to be doing as it is. This will only make their job tougher. Counting hand passes? Good luck with that.

Think about how costly a fourth hand-pass may prove at the tail end of an All-Ireland semi-final. Say a referee gets the count wrong? Everything could come down to that.

We are leaving the rules open to hang referees, again. 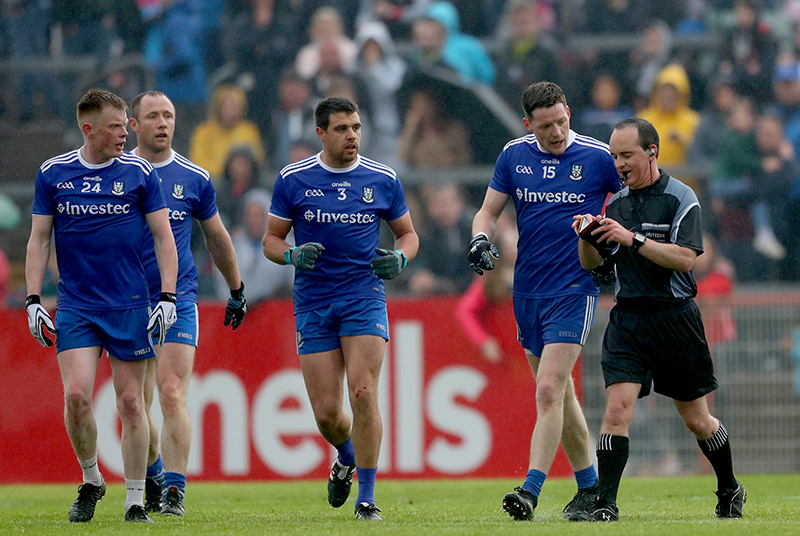 Make their job easier, not harder.

There is some logic; they are trying to encourage kicking and alleviate overly defensive systems but this is tackling the symptom rather than the actual problem.

Let me be clear: fair play to the GAA. They recognise the game needs to be a better spectacle. They are not burying their head in the sand. We have an actual debate. That’s progress in itself.

The numbers of people watching and attending games are falling all the time. We know why. Blanket defences combined with possession football is boring.

Change is needed. Recycling the ball, over and over again, has become a case of needs must. That’s become the way we all have to play in order to win.

”A shot clock is not the answer either.

I know if Dublin have 15 seconds to get a shot away, every Monaghan player will be behind the ball inside our 45. Gaelic football has obvious similarities to basketball but not enough to bring in a countdown method.

So scratch that notion (it isn’t even been trialled).

What does need doing?

The kickout is an idea worth a look. Brings the game back to its traditional line-up – six, two, six – for every restart (they may call it Dublin-proofing, or Stephen Cluxton-proofing, but see what happens if Jack McCaffrey gets on a clean ball in acres of space).

I like the idea of it having to go past the 45. I’m looking forward to seeing what Rory Beggan comes up with at training, and Cluxton along with the other goalkeepers and managers when they reveal their plans in January.

Because what happens next is very simple. The rule changes are temporarily in place so let’s get to figuring them out. 30, 40 years ago Gaelic football wasn’t as serious as it is now. People didn’t put the time we put into now. That’s just the reality. It’s all but professional.

”The rules are made to be broken, or certainly bent. That’s just high level sport.

Nobody sits idle in the winter. These trials will be surgically picked apart and figured out.

Another change that came in this year which does not sit well with me is the handing over of September to nobody. It still doesn’t make sense. We write this in October and the championship is long gone from the rear-view mirror when we should only be digesting it.

September has always been our month. The hurling comes, the football follows and we move into dark nights with Sam and Liam touring the winning primary schools and parishes. We should still be talking about it.

Monaghan club championship didn’t profit from an extra month. It hasn’t worked. We didn’t even give the air space away as rugby doesn’t gear up until now and there was no serious soccer qualifiers. 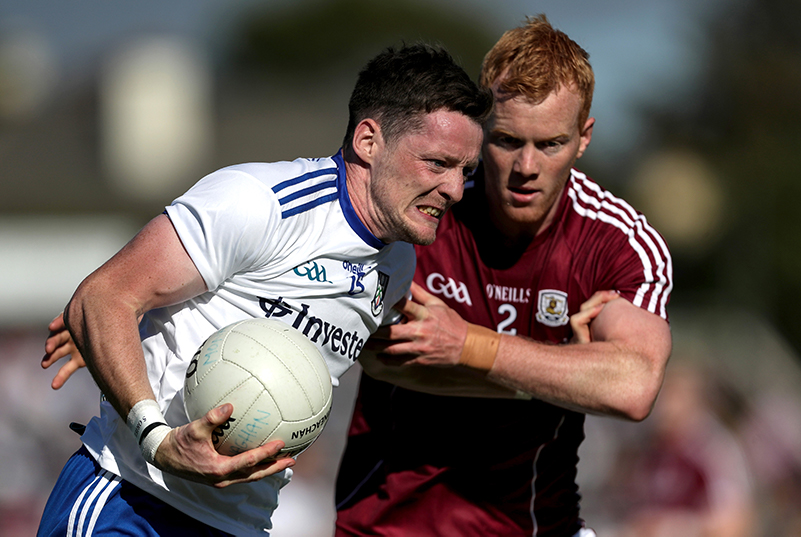 I’m struggling to see the benefit.  The ladies got their finals in September but the GAA took themselves out of the shop window. You know what you are doing Christmas Eve, on New Year’s and the first and third Sundays in September!

Again, I understand the theory but in practice gifting September to club fixtures has not worked. See the Antrim and Derry club championships for proof.

We lost two weekends we cherish. Ok, the All-Ireland finals did happen, but they came and went in a flash.

The club season needs to be streamlined. The answer to that lies with each individual county board. There is only so much the GAA can do.

”All these debates and potential solutions are for the quiet nights. I can’t wait to get back at it.

People are already telling us we had a good year in 2018 because we made an All-Ireland semi-final. We had never been there before but it doesn’t matter much when you lose. No, it doesn’t feel like a good year.

Now, it was of course. But I just want to get back playing, rules or not, September football or not, because we have unfinished business. We’ve left a few Ulster titles behind.

The new championship format worked very well. It felt like two seasons. You reach the Super 8s and it starts all over again. We had some journey. Squeezing past Kildare in Croke Park, almost breaking Kerry up in Clones was special, the ending aside, but Galway on a sunny Saturday evening was something to cherish because we had to perform. Everything was on the line and we delivered.

The races were on in Ballybrit. Thousands of Monaghan people made the journey. My former employers had me involved in a horse syndicate. It ran on the Wednesday evening at 6.10pm – Rovetta, a 33/1 shot trained by Jessica Harrington. Missed some craic that evening but I had to go training. Malachy was straight over to see how we did.

And, a few days later, we won again.

A week passed and Monaghan hardly entered the unknown. It would have been great to bring our people into September. Even early September. But we’ll go again.

After four years living in Dublin I’m back up home having started a business. No more strain on the body from those long drives.

Yeah, hopefully, all of us will go again.

Read Philly McMahon’s “A Culture Can Change“, his inspiring story of working with Mountjoy Prison.