Butler To The Captains & The Kings

We are in the Ireland changing room underneath the old west stand of the shiny new Aviva Stadium.

“This is where Anthony Foley sat. Number eight. Axel. CJ, Jamie, all down the years comes someone new…”

Moving around the room.

“This is where Paul O’Connell used to change. Right here. Strangely enough I can actually see him there still. I know it’s weird. I can hear him as well…”

The Captains and the Kings.

“These two spots here are where a famous twosome used to always sit. Mr D’Arcy and Mr O’Driscoll. 12 and 13…”

On we go, showing people about the place, reminding them of history, history, history. From the majestic Jack Kyle to our modern Grand Slam out-halves – Ronan and Johnny.

Once upon a time I used to mind them.

I was bag man for the Ireland rugby team from 1993 to the 2015 Rugby World Cup. I got called onto three Lions tours along the way. Thanks Warren!

The final curtain came at Eden Park last year. The drawn series with the mighty All Blacks being my last night as bag man for a professional team. I’m back doing it for my club Terenure College RFC, back where it all began. 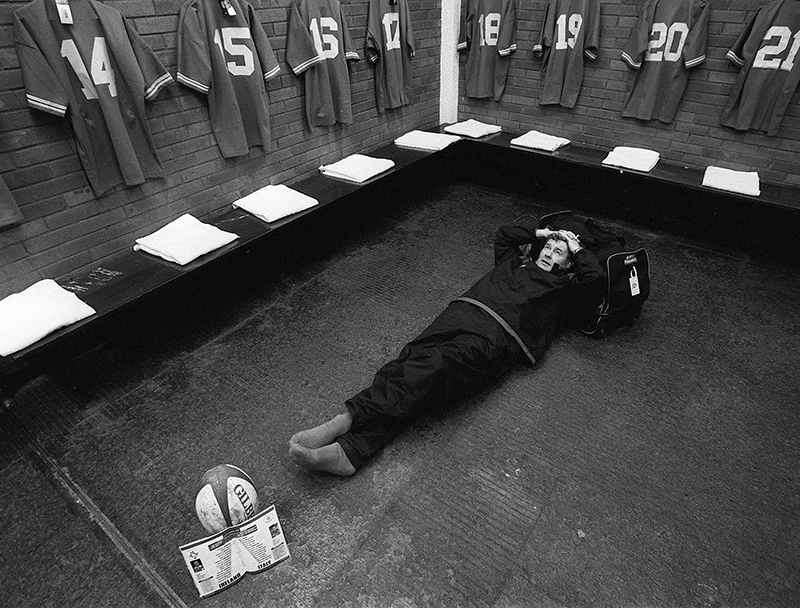 A bag man is like a butler because they are “The Captains and the Kings”, you know what I mean?

That’s how I viewed the players and coaches I served. From the poem:

“I remember in September when the final stumps were drawn”

“Let us O Lord above us remember simple things”

“When all are dead to love us, Oh, the Captains and the Kings.”

Listen and you can hear Luke Kelly singing or the bold Brendan Behan.

So many memories – from Claw, Woody, Trevor, Hendo, Brian, Jonathan – but eventually you have to let them go. Follow their careers on the television. Say an odd prayer for them, light a candle.

A chapter closes and another one opens but, I have to say, I miss them still. 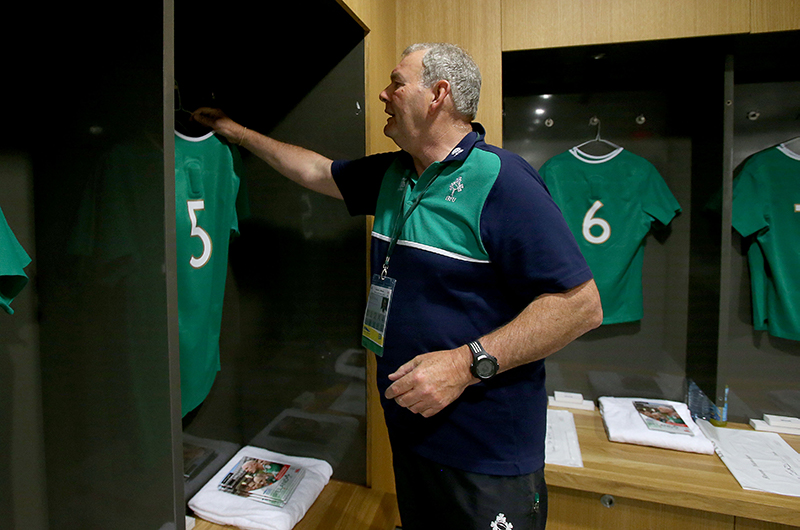 The journey began one night at the bar in Lakelands over a pint of Guinness. Just after I’d stopped playing, they asked if I’d be bag man for the coming season.

I said yeah. I’d no idea what the job entailed. Never noticed the bag man when I was playing. Maybe that’s the secret.

Anyway, that question and answer changed my life completely, took me all over the world and back again.

It started with the clubs of this lovely island for five, six years. Terenure, went down to Cork Con and Young Munster (the killing fields!), up to Malone and around the north, across town to Stradbrook. All over the place.

Then the Leinster under-21s asked me to do the bag. So, I did. Conor O’Shea, Shane Byrne, Niall Woods – all that gang. A young Keith Wood was the Munster hooker.

Leinster seniors came calling before Gerry Murphy interviewed me in the Burlington Hotel for the Ireland job. It must have gone alright because I got the gig.

Away we went for 21 years, five world cups and then in 2009 the British and Irish Lions asked me to join them in South Africa.

What a year that was: Leinster won the Heineken, Munster the League and that special day of the Grand Slam in Cardiff.

Touring with Ireland was always a thrill and a privilege. The sacrifice with tours are made by the people you leave behind – the unsung heroes are families, wives, girlfriends, children, mothers. They are the ones we could easily forget.

People always asked me for my favourite memory, or my favourite player. It’s the small, private moments that we keep to ourselves but Ronan’s drop goal against Wales to help Ireland to the Grand Slam is right up there.

There were so many pitch side sights to behold: The Lions winning in Australia. Brian’s Hat-trick in Paris. Rob Henderson’s hat-trick in Italy.

Hendo’s another great man. He always comes over for a Christmas lunch and auction I host in Terenure. Rob will say a few words, Trevor Brennan is coming from Toulouse and the Claw will be there as well.

I’m slightly concerned about those three buddies being in close proximity. 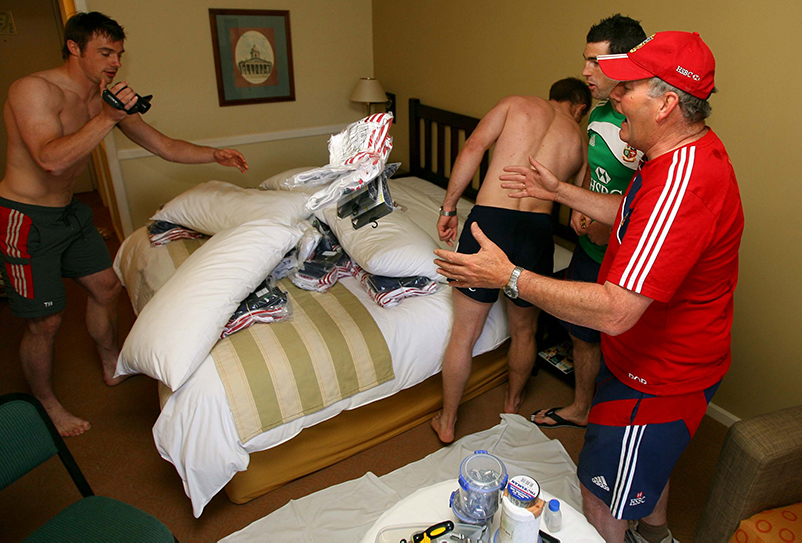 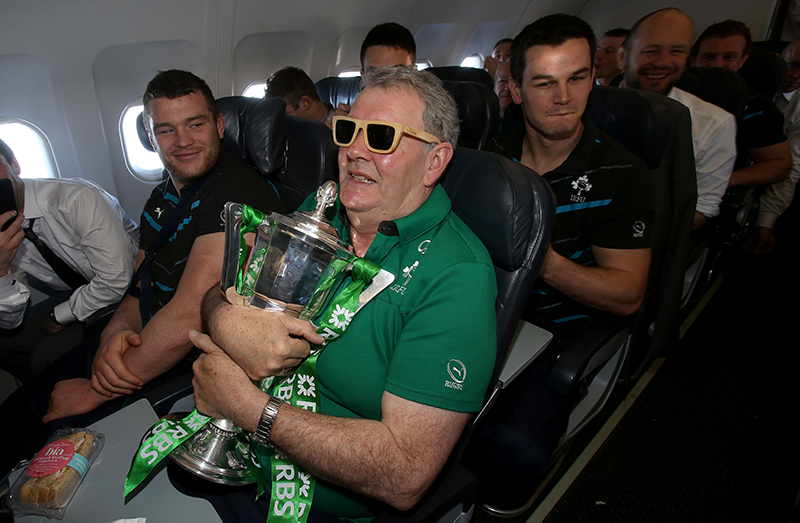 My job was to look after them.

Rala’s Room in the team hotel was where the important gear was kept. The little things. It became a place of refuge, I suppose. No “rugby talk”. Some great traditions were built up over time. John Hayes – the first Irish man to win 100 caps – used to make the tea.

And he’d hand it to you.

What always concerned me was their wellbeing. That they came out of the game in one piece.  Over 21 years people move on be it through injury, selection or natural retirement but then, instantly, new faces land into the environment. That was Cian Healy and Jamie Heaslip for a time. Great smell of coffee from the boy’s room (which tended to be next door to Rala’s Room so they could annoy me in exchange for caffeine – “There you are Lala,” they’d say).

I had names for all sorts, but Denis Hickie, Shane Horgan and Brian were The Golden Triangle. They always drifted in late to do their boots, collecting studs or whatever was needed. I’d be minding my own business as they strolled into my humble domain. One night they were discussing the great Irish problem of emigration.

Oh yeah, I had to go to England for work.

“How long were you there?”

In fact, I worked for a builder from Tipperary. Very nice man. When I went to collect my first wage package he handed over two envelopes, “Paddy, there’s your wages and there’s your fare home. You take my advice, get on the next boat back to Ireland.”

You know what, you’re right, I replied.

I can still see the lads laughing their heads off.

Listen to Rala’s tour in our new podcast here!

Subscribe to The Sports Chronicle Podcast on iTunes, Google Podcasts, Spotify, or wherever you find your podcasts.