Already Ireland’s most successful gymnast of all time, Rhys McClenaghan, talks about his rise to the top of his sport, what motivates him to succeed and inspiring future generations as he works towards his goal of becoming Olympic champion.

After the big major championships, I take time to reflect.

I’ve worked my ass off for years to get to this level, so I feel like I deserve to be where I am. But I often think about what 10-year-old me would think about what I’m doing now. My younger self would be blown away by what I’ve achieved.

Thinking that way has a highly positive mental impact on me while also making me grateful for how far I’ve come.

”I’ve learned that, to get to the top, you have to trust the process. You have to be OK with failing.

When I was younger, I put a lot of pressure on myself. Too much. It took me a long time to work that out and to understand that failure was just part of the process. The public will never know how many times an athlete will fail in training. It could be as high as 95%.

All those training sessions and failures add up to 60 seconds of a routine when you have to make it count. One minute to represent your life’s work.
Be OK with failure. 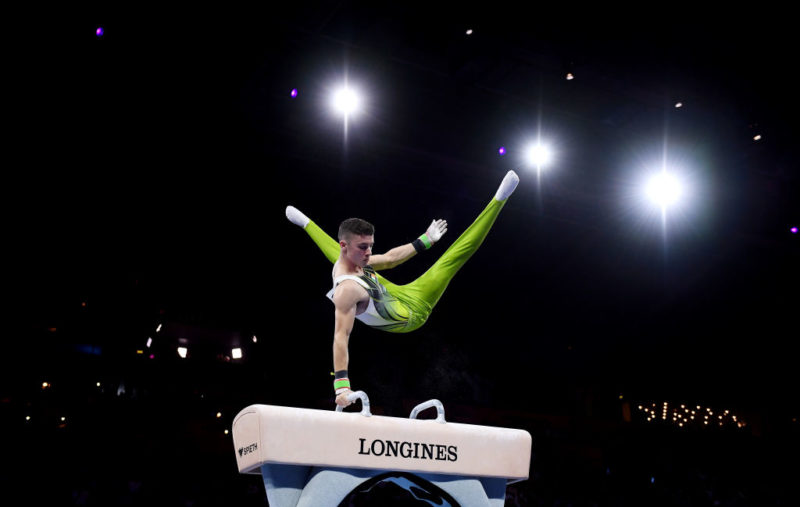 Rhys McClenaghan of Ireland competes on Pommel Horse during the Apparatus Finals on Day 9 of the FIG Artistic Gymnastics World Championships at Hanns Martin Schleyer Hall on October 12, 2019 in Stuttgart, Germany. (Photo by Laurence Griffiths/Getty Images)

Motivation is tricky. Never in your life will you find one thing that keeps you motivated. I need to constantly search for ways to manage my motivation.

Your timing has to be right too. If you strive to be constantly motivated, your brain will short circuit. It’s about pulling it back and ramping it up at the right time.

So, when I heard that the Olympics would be postponed, I had to pull back a bit. Chill out. When the time comes to perform, I will find the motivation to work so hard that I’ll walk away feeling like I have given it everything I could.

I’m not a, “let’s see what happens” kind of person. That statement sounds like weakness to me.

”My goal is to be Olympic champion.

I believe in that. There’s a big difference between saying it and believing it. My confidence in my ability has brought me this far, so I back myself to achieve that goal. 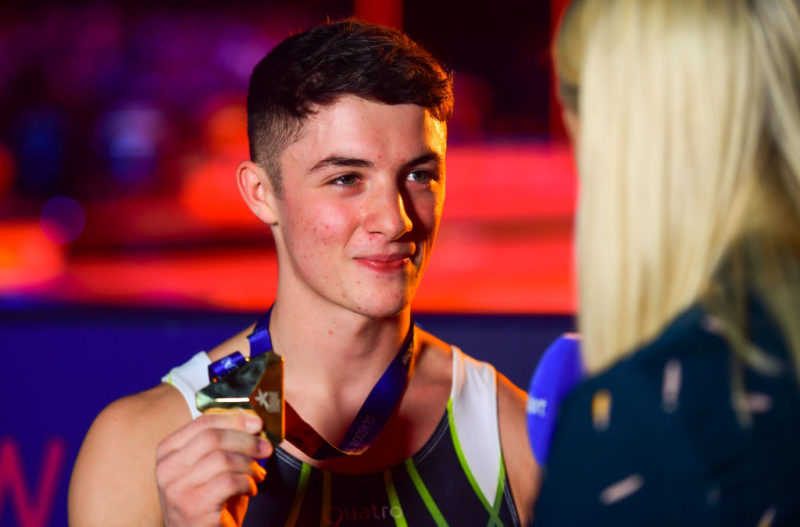 Rhys McClenaghan of Ireland is interviewed by RTE after winning gold on the Pommel Horse in the Senior Men’s Gymnastics final during day eleven of the 2018 European Championships in Glasgow, Scotland. (Photo By David Fitzgerald/Sportsfile via Getty Images)

It’s still very early on in my career. Before I came along there had not been anyone from Ireland medalling at World Championships, taking home European golds, and now facing down the prospect of medalling at the Olympics.

I don’t feel any weight of expectation, just excitement… everything about this is exciting to me.

As I progress, I’m kicking down doors for younger kids so that they can aspire to achieve at the very top level. I want to show a new generation what’s possible.

My coach, Luke Carson, has always had it in his plans to win an Olympic medal and he shared those plans with Gymnastics Ireland in early 2017. His ambition shocked a few people at the time but that remains the goal. We’re on track. It is possible. That’s exciting, not just for me but for the future of the sport here.

It requires a greater emphasis on coaching standards, but there seems to be an appetite for that. I hate hearing, “we’ve always done it that way.” For me, it’s about having ambition, pushing on and setting new standards.

Asking a 10-year-old to train four hours a day after school is a massive commitment and challenge. It requires sacrifice, dedication, and patience. That was how it was for me.

There were times when I doubted the commitment. Was it worth the sacrifice to go the opposite way to where all your friends are going? Miss the football, miss the Xbox and later on, miss the high school parties.

I just always had in the back of my head that there was something bigger out there for me to work towards. I was obsessed with Gymnastics. I watched the guys on TV winning gold medals, achieving their dreams. To see how much it meant to them, I wanted that feeling. That drove me on to keep working hard and keep making the sacrifice.

It wasn’t just my sacrifice; it was my parents too. My parents need to adjust to the fact that their 10-year-old was going to be dedicating himself to four hours training a day and the commitment they needed to allow that to happen for me. The thing that motivated them was the fact that they could see how much I loved the sport and how much it meant to me each time I progressed or succeeded in competition. It was such a huge buzz for me. Their support got me to the elite level.

I often get asked why I chose Team Ireland over Team GB which, being from Northern Ireland, was also an option for me. To be honest, it was never a choice I had to make. Gymnastics Ireland supported me from a very young age and had a really positive impact on my career.

Seeing the amount of support and the reaction of the Irish people to my European Championships victory was incredible. Having the country behind you is such a cool thing.

It’s an honour to represent the people of Ireland. 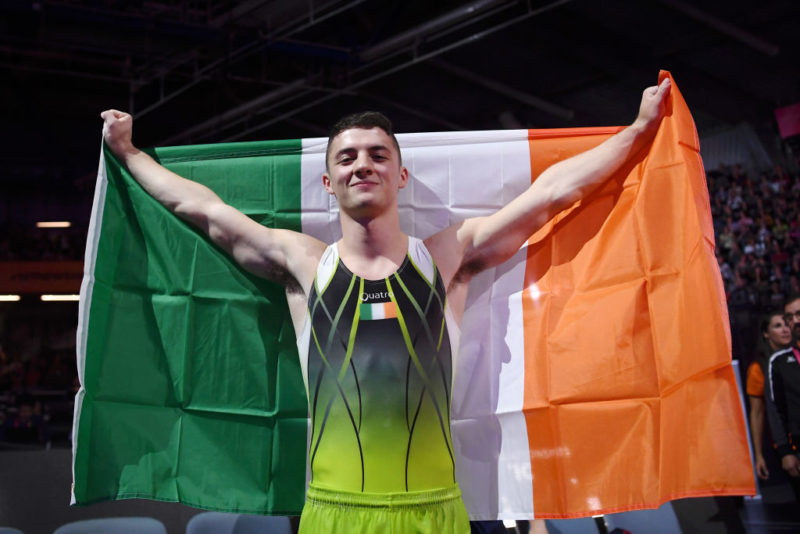 ”Gymnastics is about 80% mental, 20% physical. Winning mentality is everything.

I watched The Last Dance documentary recently. I found it so reassuring to see Michael Jordan’s obsession with striving to be the best and demanding the same standards of his teammates. That’s me through and through. I want to be the best in the world, and I won’t make any apologies for that.

I also took a lot from Jordan’s approach to performing in the moment. As he said himself, “Why would I be worried about a shot I haven’t taken yet.” Gymnastics is the very same. To worry about a routine going wrong before its even happened is ludicrous. You just have to work hard to raise your standard as high as it can go in training, and then perform when your moment comes.

As a kid I drew inspiration from athletes like Rory McIlroy and Karl Frampton. They broke down doors to get to the top level. They made me believe that if people from where I grew up could do that then I could do that.

In Gymnastics in Ireland no one’s been where I’ve been.

My hope that other kids in our sport in Ireland can draw inspiration from that and not have to look outside Gymnastics for a champion. 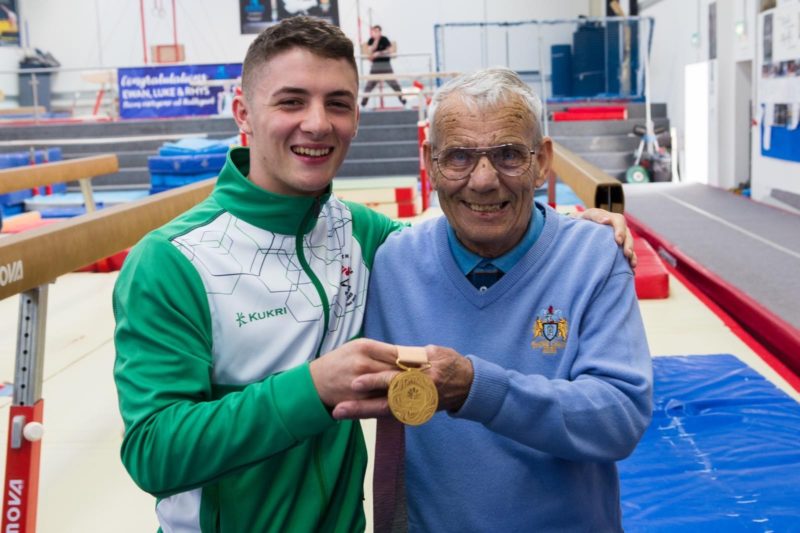 Rhys bringing back gold to his granddad, William McClenaghan who passed away earlier this year. ©Rhys McClenaghan

My granda, William, passed away in May this year. That was a huge loss for me. He was one of my biggest and proudest supporters. Every time I came through the door, he’d address me as “The Champ”. This was before I won any big championships. When things didn’t go my way, he’d remind me that I’m still The Champ and that I’d get them next time.

He wanted to engrave it on my brain that I could be the best one day and instil that winning mindset. It was always such a massive confidence boost for me that the man who carried the McClenaghan name believed in me at such a deep level.

As hard as it was to lose him, I’m happy that I got to bring home gold medals to him, show him what I’d achieved in his name and make him proud.

I’ll take that winning mindset with me every time I go out to perform.

If you enjoyed Rhys’ story you might like to read Thomas Barr’s – “Zen and the Art of Car Maintenance.”